I've been wondering this for ages:

At the end of From the New World, Saki has this piece of paper on her desk. Below you can see it (and somebody translated them to Spanish).

Apparently these are names, and some of them are followed by a number. Unfortunately I don't recognise any of those names so I'm not sure what is this paper about.

At first I guessed it was some sort of deceased people list (numbers representing their age?). However the fourth name reads "New Yuubari", so it sounds like a place rather than somebody... but it lacks a number, so it could actually be a headline, as in "the following people died at New Yuubari" - same thing for "Shinamoto", which makes sense - but then the first three names lack a headline.

So I'm not sure - what is this paper? 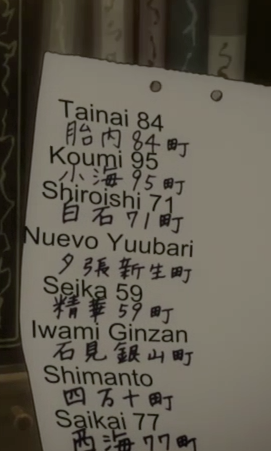 These are all place names. 町 is a marker for a town/block/neighborhood/district or road/street.

夕張 can be pronounced "yuubari." The translators were probably trying to simply the names as if they were actual place names. E.g. "New Amsterdam."

The story is primarily set is 神栖66町 (Kamisu 66th District), there are 8 other districts:

These are all named after real life locations, including Kamisu.

Not the answer you're looking for? Browse other questions tagged japanese-language from-the-new-world or ask your own question.

12
Does the Ethics Committee control all of Japan?
3
What are the real world locations for the Districts mentioned in From the New World?

14
What happened to the kidnapped human babies at the end of Shinsekai Yori?
13
"The World Will Turn To Ash" - How did this differ in the original Japanese?
2
What does the "Dark age" mean in Shin Sekai Yori?
1
What meaning is there behind the World Martial Arts Tournament logo?
6
What is the Japanese word they are talking about?
3
What is the meaning behind the scene where Saki fights a Tainted Cat?
1
What does the note from chapter 14 say?
1
What is the Independence Day that Inoue Marina has been tweeting about lately?
5
Is this poem about frogs from Non Non Biyori Repeat a common poem/rhyme?