Can Dragonslayers eat their own magic?

Early in the anime, Lucy asked Natsu if he could eat his own fire. Natsu explained that it would be like Lucy eating one of her Celestial Spirits. While this tells us that Natsu won't do it, it leaves the possibility open.

Given how Angel treated her spirits, I could imagine a more evil wizard being willing to eat their spirit if desperate enough. So, could a more evil dragon slayer eat their own magic? Would it make them more powerful or just back to the state they were in prior to casting the spell?

They can't eat their own magic. It was only recent (in chapter 391) that Silver reminded us of this during his fight with Gray.

We saw a flashback of Natsu saying he can't eat his own flames. 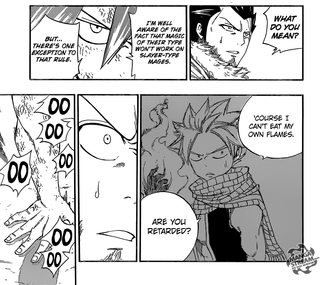 Then two panels later, Silver confirmed this by blocking Gray's attack, using Silver's magic, instead of eating the ice as he did before. As Natsu has, Silver then mentioned he can not eat his own magic. 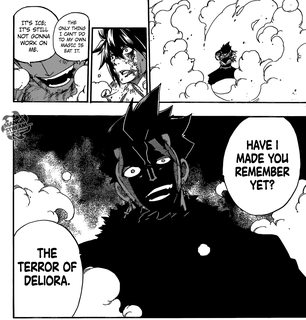 To be honest it doesn't make sense that they are physically incapable of eating their magic, but if they could Silver would have been able to eat Gray's attack instead of having to block. I guess Natsu being Natsu made an incorrect analogy, back in chapter 5. 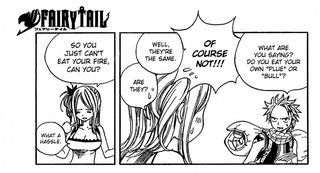 I think they can, but they just wouldn't gain any energy like they would from other sources, so it's just completely pointless. There have been points with dragonslayers in pretty tight pinches, and I'm pretty sure one of them would have at some point eaten their own magic if there were any point in doing so/ if it's even possible.

I think Natsu was just making a bit of a stupid analogy when he said it was like Lucy eating celestial spirits, at no point has there been any suggestion that a dragonslayer's element is in some way alive, and he's more than happy to fire off bursts of fire that presumably must burn out eventually, I don't think ethics come into it at all, just practicality.

My claim is that they can but will not consume their own magic because it is pointless.

Consider the mage as an entity of energy. With the dragon slayers, when they consume their element, they get a boost in energy which they use to fight (Gajeel consuming steel, Wendy consuming air, ...and so on). I presume they are using these elementals to top up on their depleted energy of to give them a boost.

If they were to eat their own magic, it will give them a boost but it would only return them to the level of energy they had before they produced that bit of magic. They see no gain in doing such. To produce magic, they have to use some energy. This energy has been converted from them into the elemental. When they consume it, it goes back into them. Arithmetically, x - 1 = x' where x is the amount of energy they originally have and x' is the amount of energy they have after producing the magic. Consuming the magic they produce will be x' + 1 = x which merely returns them to the starting point.

In the case of consuming their element which they did not produce, arithmetically, that would be x + 1 = x*, where x remains as above and x* is the augmented energy level. This augmentation is made possible because this energy did not originally reside in them.

So yes, they can eat their own magic but it would be pointless

Well he can but he just chooses not to because he is uncomfortable doing it but if it's absolutely necessary he will.

10
How is Mystogun able to eat apples through his scarf?
10
Can the Three Great Magic of Fairy Tail be only used by Fairy Tail members?
9
What dictates who can use what magic in Fairy Tail?
2
Can wizards/magic users possess more than one type of magic?
5
Can Dragon Slayers teach Dragon Slayer Magic?
6
Can Natsu eat fire from objects he burns?
7
What was the source of magic used in Grand Magic Games in Fairy Tail?
5
Can more than one person use the same type of Take Over magic?
2
Does Wendy eat air to help her with her power?
3
Can you end up with a different type of magic than taught?