Is Digitamamon a parody of the tamagotchi?

In Digimon Adventure (in both seasons), we meet Digitamamon, a profoundly evil, greedy digimon who looks like a giant egg with dinosaur legs and a crack in the shell where two yellow eyes stare out.

Digimon (which preceded Pokemon) is based off a toy for boys that competed with the Tamagotchi toy. Tamagotchi is a egg-shaped toy featuring an egg that quickly hatches into an alien being.

Digi-tama-mon breaks down to digital-egg-monster (with digi and mon being borrowed from English).

Digitamamon is one of the few digimon with the word 'digi' in its name, suggesting something digital, but it doesn't look digital at all. That's why I wonder if it's related to the Tamagotchi, the first 'digital egg'.

That's an interesting hypothesis, but I don't think it's right.

As the Digimon enthusiast will recall, the eggs from which Digimon hatch are called "Digi-Eggs" in English. However, in Japanese, they are called "Digi-Tama" (デジタマ), from which the English is basically directly translated, since tama means "egg", as you pointed out.

It seems rather more likely that the name "Digitamamon" derives from "monster that is a Digi-Tama/Digi-Egg", rather than "digital monster that is a tama/egg". The latter interpretation might suggest a connection to Tamagotchi, but is unlikely, since (as you pointed out) it doesn't look particularly digital at all. However, it does look a lot like a Digi-Tama/Digi-Egg - see below. 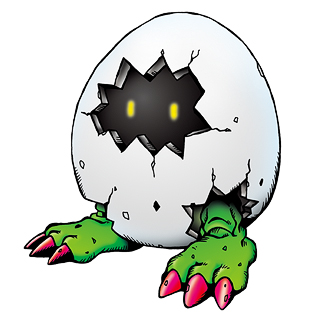 That said, I think there still is a connection to the Tamagotchi in a different way: it's widely acknowledged that the Digimon product line is basically "Tamagotchi plus battles".

Recall that both Digimon and Tamagotchi are Bandai products. It's thought that the Tamagotchi sold well among girls but not boys, leading Bandai to introduce Digimon to capture the other half of the market. As such, even if Digimon and Tamagotchi aren't explicitly referencing one another, it shouldn't be too surprising that they will have some features in common, being produced by the same company and all.

Not quite. The chronology here is as follows:

Digimon didn't complete with Tamagotchi at all. They WERE Tamagotchis and by the same company, Bandai. Just a newer version or sideline that took on a life of its own. With that in mind, Digitamamom wouldn't be a parody but more likely a homage to its own other brand.

4
Is the Omnimon reference in Season 2 relating to the first Movie?
4
What was Tai cooking in the Digimon movie?
8
Why does no one notice the 2nd generation Digi-destined in Digimon Tri?
4
Why haven't the 2nd generation Digi-destined (excluding Hikari and Takeru) aged?
1
Why isn't Digimon consistent with its rule mechanics per story/season title?
1
What is the sad music/soundtrack played in Digimon Tri Movie 1 Episode 1?
3
Why weren't some of the original Digimon able to evolve into their Ultimate/Mega forms in season 1?
0
What is the production order of digimon?
5
How 'wild Digimon' in the Digital World fuse or DNA digivolve?