Why is Taiga afraid of dogs?

On the Kuroko no Basuke Wikia here under personality it says this about why Kagami Taiga is afraid of dogs which is as follows...

When Kuroko brought Tetsuya #2 (The Dog) to training, it is revealed that Kagami is scared of dogs. This fear originates from his time in America, where he was once bitten by a dog.

However I am not sure if this information is accurate or just made up. Does anyone know what episode in Kuroko no Basuke mentions where this fear originates from?

The Kuroko no Basuke wikia (unlike most wikias) is actually pretty good about citing its sources. The statement you quote includes a reference to chapter 74 (found in volume 9), page 9: 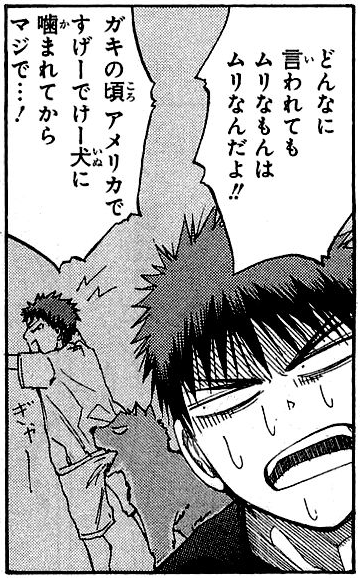 I don't believe this was mentioned in the anime, though. At minimum, Kagami doesn't say anything about it in episode 14, which is when the dog is introduced in the anime.

It is said in the anime, I haven't read the manga either but I did got that from the anime. The reason why he is so scared of dogs is because when he was young he was teasing a dog, the dog got mad and bit him. so technically it was his own fault.

4
Where did Kagami Taiga live when he lived in the US?
4
Why is Aomine so dark-skinned?
5
Why does the Teiko basketball club have over 100 members?
4
Why does Midorima's nails influence his shots?
6
Why weren't Kise and Midorima able to get in the Zone?