Where is this girl in a maid uniform holding a cat from? [closed]

I ran into this picture while on the internet. This was referred to as a fictional character, and judging from the art style it's probably from an anime or manga. 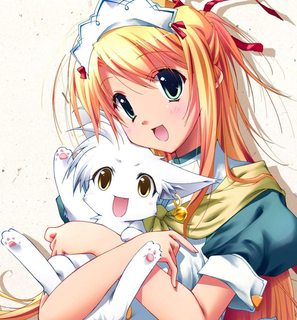 Where is this character from? I tried running a Google Image Search but for some reason nothing useful came up for me. Or is this just some fan-made original character?

This image is of (spoiler warning in links) Solne and Koma from the 2005 visual novel/eroge Ouka by Carriere. As far as I know, there's no anime or manga adaptation. They also appear in the original game Shinkirou (which Ouka was an expanded remake of), but the character design in the image matches Ouka's. As you can probably guess from the image, Solne is one of the main characters in the game, while Koma is the cute mascot animal (she's not actually a cat).

The plot from vndb:

The last descendant of a line of mystical protectors, Yuuya Furusaka has received the twin blessing of Life and Death, and now his touch has the power to save lifes or destroy them, although at the price of, respectively, his own life or his own soul. But maybe the key for his salvation is hidden in one of the girls around him...

In case you're unsure it's the same character, if you look at the full version of this image, you can see the Carriere logo in the lower left corner. Modified versions of this image have been used for some of their merchandise, e.g. this ZIPPO lighter. 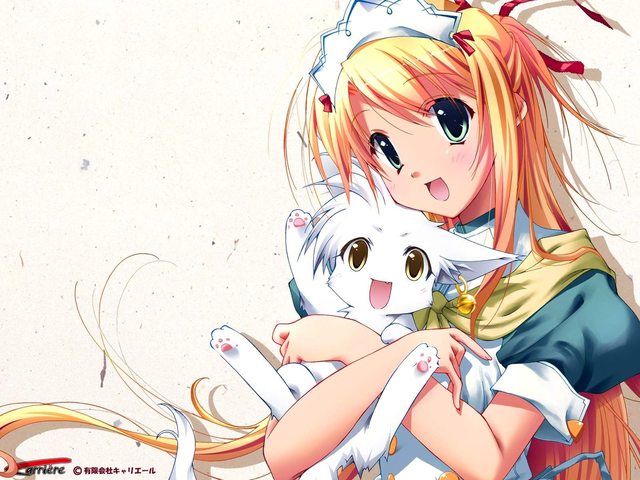 Mine is more of a vague guess for an answer, but I was actually kind of thinking the image looked kind of like Sorune for some reason from Ouka (A game). 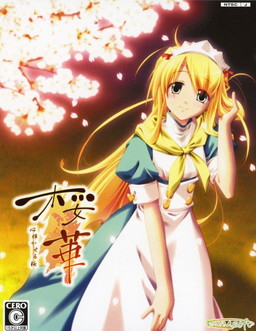 I am glad you found what you were looking for though. I thought it would be interesting to post this though. The picture above looks kind of similar in a way.

Not the answer you're looking for? Browse other questions tagged ouka or ask your own question.