Who is the main character of Fairy Tail?

Who is the main character of Fairy Tail? Would it be Natsu or Lucy? Natsu is like the hero of the whole anime, but I think the main story revolves around Lucy, how she met Natsu and how she joined Fairy Tail etc. I read the description of Fairy Tail and it says:

Lucy is a 16-year-old girl, who wants to be a full-fledged mage. One day when visiting Harujion Town, she meets Natsu, a young man who gets sick easily by any type of transportation. But Natsu isn't just any ordinary kid, he's a member of one of the world's most infamous mage guilds: Fairy Tail.

Preferably if we could draw an in a canon answer (e.g. interviews with the authors etc.), who would be the main character of Fairy Tail? Natsu or Lucy?

Usually the main purpose of a manga is explained in the first chapter, being the introduction to the complete story. In that sense both Natsu and Lucy would be the main protagonists. Both Natsu, Lucy (and Happy) are introduced in the first chapter. Natsu, who is searching for Igneel, while Lucy wants to join Fairytail and become a great Celestial mage.

Introduction of Natsu (and Happy) 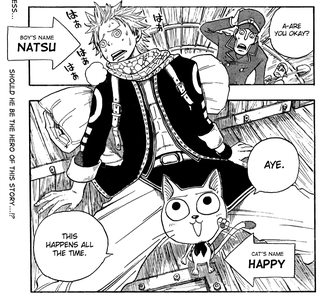 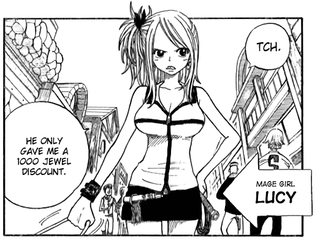 Both Natsu and Lucy mention their goal in the story 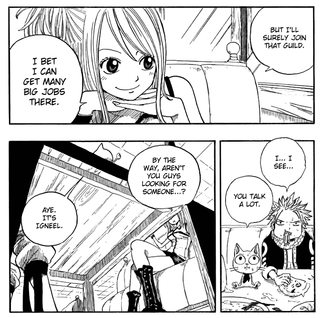 On the other hand, the title usually points towards the main story too, like with One Piece, where Luffy is searching for the One Piece. In that sense Lucy should be more considered as being the main character as her story actually revolves around Fairytail, since she doesn't just want to be just any mage, she wants to be a FairyTail mage. Natsu just happens to be in Fairytail, but his story doesn't really revolve around his guild. He just wants to find his father.

The Wikipedia page on Fairy Tail agrees on this, saying:

Fairy Tail follows the adventures of Lucy Heartfilia, a teenage wizard (魔導士 madōshi?),1 who joins the titular wizards' guild and teams up with fellow guild member Natsu Dragneel as he searches for the dragon Igneel.

Natsu is an important person to the story, and he is also introduced first of all, even before Lucy, but going by this Wikipedia quote I would say Lucy would be the main (and only?) protagonist.

In my opinion Natsu is the main character, because at the root he is the one that everyone in fairy tail relies on. It can be clearly seen that all important fights include Natsu at the core. Even though Erza, Laxus and Gray and all others are powerful, still Natsu is the one that always fights hardest and finishes the battle.

In the episode where everyone is on Tenrou island, Zeref's magic was unable to kill Natsu because of his scarf. Also Zeref said that Natsu was still not ready to kill him and Zeref and demons from his book are the evil mages.

So IMHO Natsu is the Protagonist

There are 5 main protagonists: Natsu, Happy, Gray, Erza and Lucy.

I feel the story revolves around them more than just one of them. They are all important to the plot of Fairy Tail, as if one were removed, the story probably wouldn't be as intriguing as it is now. So I say that there is no main character, but a bunch of main characters altogether.

It would seem Lucy is the main character, as Peter Raeves said, both Natsu and Lucy are mentioned in the first chapter (and episode).

In the more recent chapters

when Fairy Tail split up, the story came back to focus on Lucy and on what she was doing, then slowly adding Natsu, then Juvia and then Gray.