Why does Conan call Bourbon a liar? 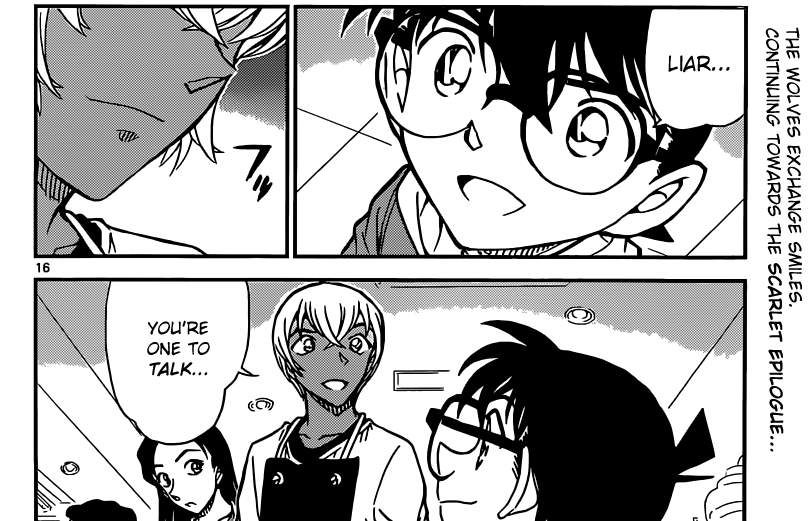 Why does Conan call Bourbon a liar? I still don't get the context of this at the end of chapter 897

A nice question. I have to get around a few topics to find a logic answer.

Let's start with the explanation of the "Liar" statement against Toru Amuro. The life Amuro is living and showing to all people around him is just a lie / fake. He claims to be a detective like Kogoro in the first episode he appears. And after the case is solved, he wants to be his apprentice to stay close to him, for "learning from the Great Kogoro". But after we know he is Bourbon, the whole perspective changed. What does he want? Why is he with the main characters? What exactly is his plan? Soon it is revealed: he wants to prove that Shuichi Akai is alive and he and Kir faked his death. This makes him a fearful enemy: he is close to the main characters, he has the possibility to find out the truth, yet, Toru Amuro is not who we think he is - he's a pretty good liar.

Akai explains it in the current chapter: Toru Amuro is actually Rei Furuya, an undercover cop! He is also infiltrating the Organization, like Akai used to / like Kir is at the moment. The theory that Bourbon is our enemy is complete nonsense - he is on our side, even though he hates Akai for some reasons.

He even lies to Vermouth at the end: he claims that he was wrong; that Akai is in fact dead and Kir is loyal to the Organization. This lie shows us the real side of Amuro - he's a friend.

For me, the situation you are confused by is a simple message to each other: Conan knows about the real Amuro, the real person behind his role. But Amuro in return has his own reasons to question Conan. The Sleeping Kogoro is one point Amuro questions and believes Conan to be behind it -> there is this one scene where he phones with Vermouth and says that he wants to stay with Kogoro because he wants to solve the mystery behind the Sleeping Kogoro.

My conclusion: Conan and Amuro know the lies of each other. And with that scene ("Liar" - "You're one to talk...") they admit that they know each others secret.

My fingers hurt. I hope this answers your question (a bit).

1
Why did Heiji's mom have to lie to Mouri and Conan in episode 220?
2
Why Hyde Park become Haido Park?
1
Why is the average number of suspects three or more in Detective Conan?
4
Is there any special episode of Conan and Kindaichi working together?
0
Who is the woman who talks to young Tooru Amuro/Rei Furuya?
1
Why do Conan and the Detective Boys call Ai “Haibara-san”?
1
How does Kaito Kid know the true identity of Conan in the 3rd movie?
2
Why does Haibara attend school?
2
Why did not Conan tell Haibara about the liquor that made him restore to his original size as soon as possible?