Black Butler ("Kuroshitsuji") is a manga series by Yana Toboso about the twelve-year-old Earl of Phantomhive and his demon butler Sebastian Michaelis. It has several adaptations in anime and other media. 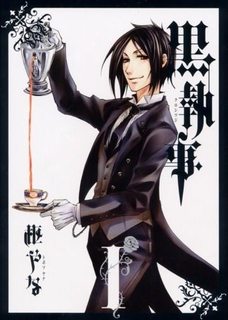 Black Butler (黒執事; Japanese title: Kuroshitsuji) is an ongoing manga series and completed anime by Yana Toboso. It's about Ciel Phantomhive, who is a twelve-year-old earl, and his demon butler Sebastian Michaelis.

What are the cats watching?

What anime is this GIF of a grey-haired boy eating from?

What is the song that Drocell sings?

Why did the Black Butler anime diverge from the manga?