"Boku wa Tomodachi ga Sukunai" (or "Haganai: I Don't Have Many Friends") is a light novel series written by Yomi Hirasaka. 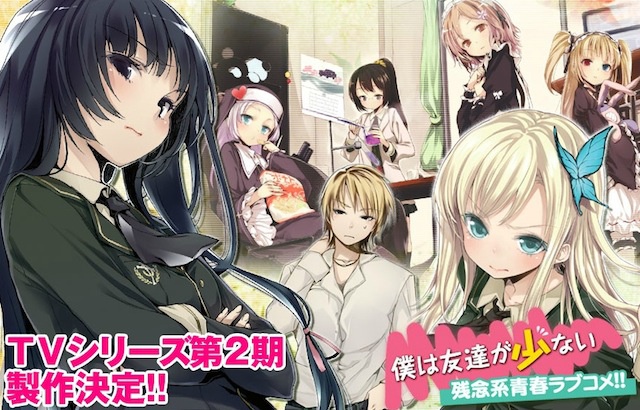 Boku wa Tomodachi ga Sukunai (or Haganai: I Don't Have Many Friends) is a comedy/harem light novel series written by Yomi Hirasaka with manga and anime adaptations. The story follows a transfer student, Kodaka Hasegawa, who meets a solitary female, Yozora Mikazuki, and starts a club called "the Neighbor's Club" in order to make friends and improve their social skills.

The original light novel was published in August 2009 by Media Factory. The first manga series Haganai: I Have No Friends, written by Yomi Hirasaka, started publication in 2010 and the second manga series Boku wa Tomodachi ga Sukunai+, written by Misaki Harukawa, was also published in 2010 and spans 2 volumes. The first season of an anime TV series adaptation was directed by Hisashi Saito and produced by AIC Build, and started airing in October 2011 with 12 episodes. A prequel single episode OVA was released in September 2012 and a 12 episode second season started airing in January 2013. The second season Haganai NEXT, also produced by AIC Build, was directed by Toru Kitahata.

Why are Kobato's eyes inconsistent in color between episodes?

Origin of the name “Haganai”

Why did Kate's pendant become a key, when it is shown as a locket before?