"Claymore" is a fantasy/action manga series by Norihiro Yagi. 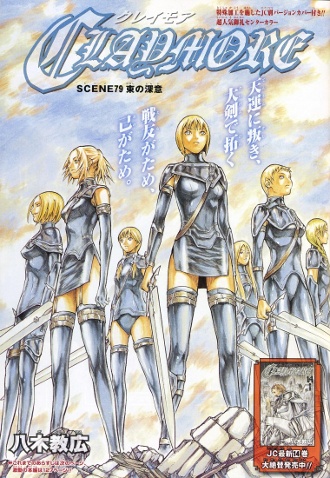 Claymore is a fantasy/action manga series written by Norihiro Yagi that was later adapted to an anime TV series and a Nintendo DS game. The story is set on a medieval island where powerful humanoid creatures known as "Yoma" masquerade as part of the population, feeding on humans. In order to fight these creatures, a mysterious organization develops female warriors, known to the public as "Claymores" due to the large swords they carry, with speed and power beyond that of the Yoma.

The manga began serialization in May 2001 and is published in North America by Viz Media. The 26 episode anime TV series, directed by Hiroyuki Tanaka and produced by Studio Madhouse, started airing in April 2007 and ended in September 2007.

Do Claymore manga and anime have different endings?

Manga/anime about a woman who can turn into a monster

How does a Claymore move up in rank within the Organization?

Can female Claymores give birth to babies for their husbands?