CosPrayers (or "The Cosmopolitan Prayers", or "Chō Henshin Kosu∞Pureiyaa") is a 2004 anime series. 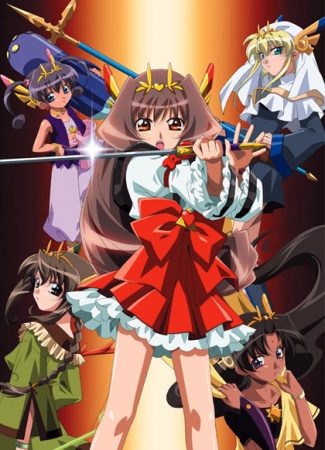 The Cosmopolitan Prayers (also Chō Henshin Kosu∞Pureiyaa, often shortened to CosPrayers) is a short original anime from 2004 produced by studios m.o.e. and IMAGIN. It follows a group of seven girls with superpowers granted via transforming. After being thrown into a world without any other people, they need to use their powers to seal the dark towers and reawaken the sun goddess Amaterasu.

CosPrayers is related to Smash Hit! (see smash-hit) and LOVE♥LOVE? (see love-love). In both of those series, CosPrayers is a television show, and various aspects of its production are described. CosPrayers was the first of the three series to air.