Gintama is a drama-comedy manga by Hideaki Sorachi, featuring a good-for-nothing silver-haired samurai who was once feared as the White Demon. It is set in an alternative Edo during which instead of westerners, alien came and conquered Japan. It is has lots of dirty jokes and parodies of other anime and manga. 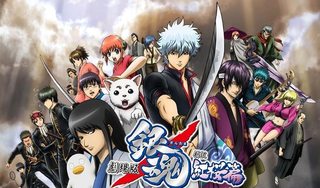 Gintama is a comedy/parody manga written by Hideaki Sorachi, with TV anime and movie adaptations. The story takes place in Edo, in a time where aliens have conquered Japan who have put a ban on carrying swords, and focuses on an eccentric samurai named Gintoki Sakata.

Why did Gintoki scream “Psycho-Pass!”?

Why is Gintama considered a 'Sci-Fi' genre anime?

What anime/manga are the sword and the dog in this image from?

What is this time machine gag referencing?