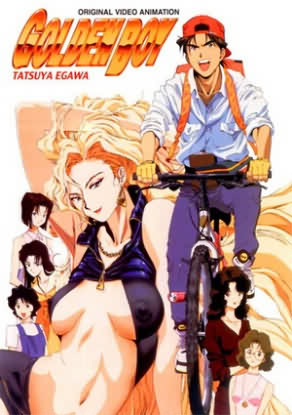 Golden Boy is an adult comedy manga written by Tatsuya Egawa and adapted into a 6 episode OVA. The story follows Kintaro, an underemployed/freelance worker, who ends up pitted against beautiful women. Both the manga series and OVA involve ecchi elements, with the manga being borderline pornographic.

The manga was published in 1992 in Super Jump and spanned 10 volumes. The OVA, released in October 1995, was directed by Hiroyuki Kitakubo and produced by Production I.G. A short second manga series was published in 2010 that was more outright-pornographic than the first series.

Is there any anime continuing or inspired by Golden Boy (Kintaro)?