Hellsing is a vampire action manga by Kouta Hirano with two anime adaptations. Commanded by Sir Integra, the Hellsing anti-vampire organization defend England against unholy monsters. Integra's ultimate weapon, the original vampire Alucard is the key in this battle. 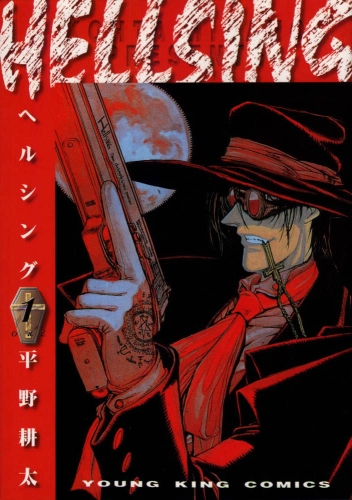 Hellsing is a vampire action manga by Kouta Hirano with two anime adaptations (one a TV series, the other an OVA).

The Hellsing Organisation, also known as Holy Order of Protestant Knights, is led by Sir Integra Fairbrook Wingates Hellsing. The story centers around the organization's mission of destroying the undead and supernatural forces that threaten the country. One of the main characters of the series is Alucard - the most powerful Vampire that swore loyalty to the Hellsing Family.

The manga, written by Kouta Hirano, was published between 1997 and 2009 and spanned 10 volumes. A second manga series called "Hellsing: The Dawn" started publication in 2001 and is also written by Hirano. An anime TV series adaptation was made in October 2001, directed by Umanosuke Iida and produced by Studio Gonzo, it had a short 13 episode run. Another adaptation was made as an anime OVA in February 2006 until December 2012 that spanned 10 episodes.

For more information, see the Wikipedia page or the Hellsing wiki.

Is there any way to kill Alucard?

Is there any way to kill Alucard?

Why is the name “Harkonnen” used on Seras' cannon in Hellsing?