Use this tag for questions about the "Monogatari" series of light novels by Nisio Isin, as well as the anime adaptations produced by SHAFT (including Bakemonogatari ("Ghostory"), Nisemonogatari, Nekomonogatari: Kuro, Monogatari Second Season, Hanamonogatari, and Tsukimonogatari). 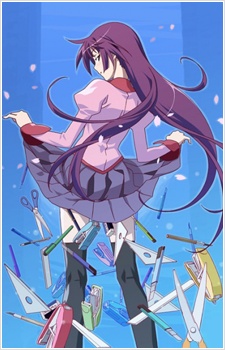 Monogatari (物語, "story") is the general name for a series of light novels written by Nisio Isin and illustrated by Vofan. This series revolves around a third-year high school student, Koyomi Araragi, who was a vampire for a while, but has almost regained his humanity.

The light novels received a number of anime adaptations.

Why does Bakemonogatari exclusively use katakana?

Why does Mayoi get embarrassed about this tongue twister?