Shaman King is a manga series by Hiroyuki Takei. 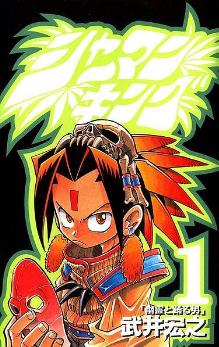 Shaman King is a manga series by Hiroyuki Takei. Yoh Asakura, the protagonist of the series, is a shaman - a medium between the words of the living and the dead. The story follows him as he tries to become a Shaman King by winning a Shaman Fight - a competition which is held between shamans once every 500 years.

The original manga was very popular, selling over 22 million copies in Japan as of 2007, while the new volumes are are also very popular both in Japan and in the US.

Other media (besides the manga and its anime adaptation) include thirteen video games, soundtrack CDs, and a trading card game.

Why do sword owners tap them with a fluffy ball on a stick?

Why do sword owners tap them with a fluffy ball on a stick?

Is there a reference to Zenki in Japanese mythology? Or did Shaman King intentionally reference Zenki (anime/manga)?