Celestial Method (Sora no Mesoddo) is an anime created and written by Naoki Hisaya release in October 2014. 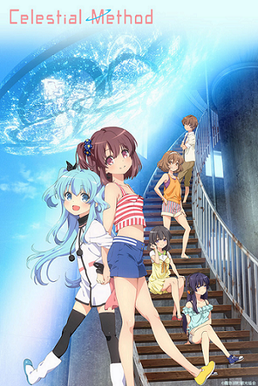 Nonoka Komiya is a girl who once lived in Lake Kiriya City, based off of Lake Tōya Hokkaido, where she met a blue-haired girl named Noel. Seven years later, Nonoka returns to the city, which now has a mysterious saucer floating above it, and reunites with Noel, who promises to grant her wishes.

A Manga adaptation was serialized in ASCII Media Works' Dengeki Daioh magazine in August 2014 and the first tankōbon volume was released in October.

What plant does Noel use as an umbrella/parasol?

What's the tune that Noel is humming in Sora no Method?