Sunday Without God is a 2010 light novel series by Kimihito Irie, with a 2013 anime adaptation. 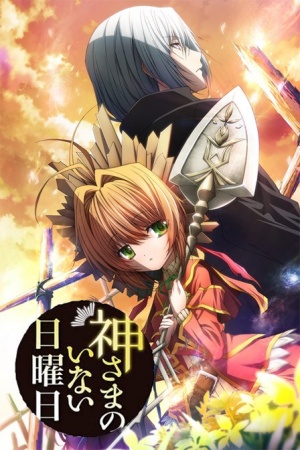 Sunday Without God (Kami-sama no Inai Nichiyoubi; abbr. "Kaminai") is a light novel series by Kimihito Irie, first released in January 2010. A manga adaptation began publication in October 2010, and an anime adaptation was broadcast in 2013.

It takes place in a world that God has abandoned, where people are unable to give birth and the dead cannot rest unless buried by "gravekeepers". As a young gravekeeper, Ai's life is changed forever when a mysterious man comes and slays her entire village.

Why have people's wishes become so powerful after God vanished?

What exactly happened at the end of Kamisama no Inai Nichiyoubi?

Where can I find the Sunday Without God light novels in English?

What exactly happened at the end of Kamisama no Inai Nichiyoubi?

Why was everyone attempting to fool Ulla?