"Kara no Kyoukai: The Garden of Sinners" is a light novel series by Nasu Kinoko about a young woman who has Mystic Eyes of Death Perception. It has been adapted as several anime movies. 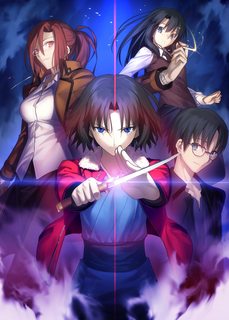 Kara no Kyōkai (空の境界, lit. Boundary of Emptiness), subtitled The Garden of Sinners and also known as Rakkyo (らっきょ) is a light novel series by Nasu Kinoko.

After an accident Shiki is in a comatose state for 2 years, when she wakes up she finds that SHIKI has sacrificed himself and she now sees "lines of death" which by interacting with them causes things to die or be destroyed. While in hospital she is approached by Touko Aozaki, a Magus and Doll Maker who runs Garan no Dou, an agency that engages in cases with supernatural or abnormal elements. Touko offers to teach Shiki to control her "Mystic Eyes of Death Perception" and in exchange Shiki works with her.

At the same time Shiki struggles with her own identity now with SHIKI gone but with the help of Mikiya, who too works for Touko while his sister Azaka is studying Magecraft as Touko's apprentice, Shiki gradually finds happiness through her's and Mikiya's relationship.

The Light Novel's chapters have been adapted into a series of anime movies first released in December 2007. Before the release of the 7th movie Kara no Kyoukai Remix -Gate of seventh heaven- (空の境界 Remix -Gate of seaventh heaven-) was release which was a collection of key themes and scene from the first 6 movies but in chronological order with new scenes added in.

The latest release Future Gospel (未来福音, Mirai Fukuin) was announced at the TYPE-MOON Fes. 10th Anniversary Event and began screening in Japan on the 28th September 2013.

What is the meaning behind Mana Ryougi's name?

Does the name Shiki have some sort of relevance to Death?