Tokyo Ghoul (Japanese: 東京喰種-トーキョーグール-) is a manga series by Sui Ishida. It follows the story of Kaneki Ken, transformed into a half-ghoul, half-human hybrid and forced to adapt to their lifestyle in order to survive. 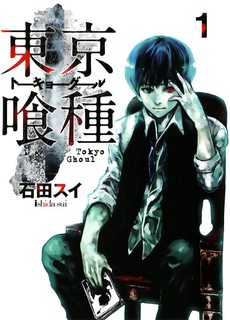 Tokyo Ghoul (Japanese: 東京喰種-トーキョーグール-) is a dark fantasy manga series written by Sui Ishida. The history takes place in a world where Tokyo is divided between humans and ghouls, creatures that must eat human flesh to survive. Ken Kaneki, after an encounter with one of them, becomes a half-ghoul and has to deal with his new condition.

Why did Kaneki's hair change color?

Why is Tokyo Ghoul's second season called √A?

Is there a uncensored version of Tokyo Ghoul?