Tsukihime is a Japanese visual novel created by TYPE-MOON. It was originally released in December 2000. 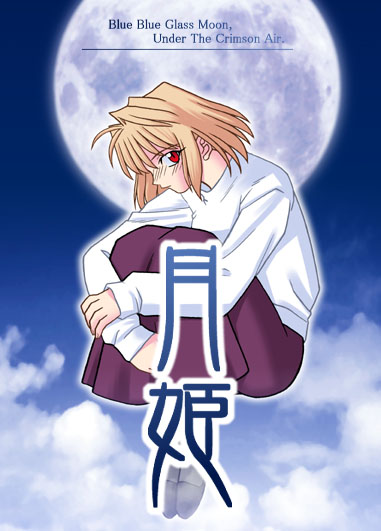 Tsukihime (月姫, Tsukihime, Moon Princess) is a Japanese visual novel created by TYPE-MOON which was originally released in December 2000.

The story follows Shiki Tohno who suffered a life-threatening injury as a child. As a result, Shiki can see "death lines" which by tracing with an object (knife, ruler, etc.) can destroy the object or person the lines belong to. Shiki is able to block out these line by using a special pair of glasses given to him by a sorceress who he calls "Teacher" (Aoko Aozaki).

The game's plot begins years after the injury, when, after being banished from the Tohno Household, is called back by his sister Akiha who is now the head of the Tohno Family following the recent death of their father.

The game is split into five routes with the romantic interest of each route focusing on one of the five heroines of the story, Arcueid Brunestud, Ciel, Akiha Tohno, Hisui and Kohaku. A sixth route that had been planned to focus on Satsuki Yumizuka however was not included and is often used as a butt of jokes in spin-offs.

A Side Story called Alliance of Illusionary Eyes (幻視同盟, Genshi Doumei) was released with the first four chapters of kara-no-kyoukai which focused on Akira Seo, an underclassman of Akiha Tohno. Alliance of Illusionary Eyes saw Tohno Shiki's first visual appearance. Characters of the series cross with characters from the Fate/ Series in Carnival Phantasm

A true sequel was released in the form of Kagetsu Tohya (歌月十夜, Kagetsu Tohya) which once again follows Tohno Shiki but also further develops the character Len, a Familiar who makes a brief mention by Arcueid in Tsukihime. TYPE-MOON announced in June 2008 a remake to Tsukihime which would include enhanced artwork and sound, changes to the storyline, and the originally discarded route for Satsuki Yumizuka.

Why is it said that the Tsukihime anime "does not exist"?

Does the name Shiki have some sort of relevance to Death?