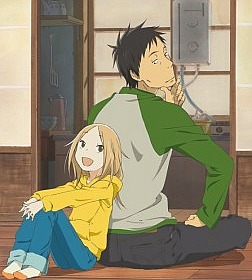 The Story begins with Daikichi Kawachi, a 30-year-old single man who returns home for his grandfather's funeral. there he learns of Rin Kaga, his grandfather's illegitimate six-year-old daughter and an embarrassment to all his relatives and is treated as an outcast.

Annoyed by this Daikichi decided to take responsibility of Rin and raise her himself despite being single and having no experience raising a child. He is helped by Kouki Nitani, a single mother and a friend of Rin's who she meets in nursery school.

The manga was licensed to English by Yen Press with the 9 bound volumes having been published by August 2013 and Usagi Drop: Bangaihen released in April 2014 as a tenth one. the publisher Delcourt has the license for the French release of the Manga.

An Anime adaptation was produced by Production I.G and aired on the noitamina timeslot on Fuji TV from July 2011 to September 2011 with Toho, Fuji TV, SMEJ, Dentsu and Shodensha involved in the production of the series. the anime was later licensed by NIS America for English Release. the Anime covers only the first part of the Manga which is before the 10 Year skip where Rin enters high-school.

A Live-Action Film adaptation of the Manga began prodcution in June 2010 and was released in Japanese theaters in August 2011. Directed by Sabu the role of Daikichi is played by Kenichi Matsuyama while child actress Mana Ashida plays the role of Rin.

Is the identity of Rin's father confirmed?

What is the significance of the title "Usagi drop"?