Wagnaria, known in Japan as Working!!, is a manga series by Karino Takatsu. It has been adapted into two anime series, Working!! and Working'!!. 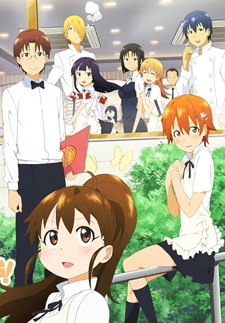 Souta Takanashi is a high school boy who loves small things such as puppies, children, and the water flea, due to his upbringing surrounded by large and domineering older sisters. When tiny high school girl Popura Taneshima approaches him offering a job as a waiter as a family restaurant, Takanashi takes it, just to be near her. Unfortunately, the restaurant staff is full of weirdos: Mahiru Inami, another waitress, is so afraid of men that she pummels them the moment they approach; the head waitress, Yachiyo Todoroki, carries a katana everywhere; Hiromi Souma, one of the cooks, is a snoop who blackmails people with the information he collects on their private lives; and the manager, Kyoko Shirafuji, is a former delinquent who sits around all day eating the restaurant's food. Only Jun Sato, the other cook, is anything like normal, and he's cursed to be in love with the totally oblivious Yachiyo, who fawns over the manager all day.

The manga series Working!! began its run in Square Enix's Young Gangan magazine in 2005. It has two anime adaptations, Working!! and Working’!! (note the right single quote between the title and exclamation points). In the US, the anime series is known as Wagnaria and is licensed by NIS America.

Who is this character in Wagnaria / Working?

Why does Yamada always say her name?