Shigatsu wa Kimi no Uso (Your Lie in April) is a music manga series by Naoshi Arakawa. It has an anime adaptation by A-1 Pictures. 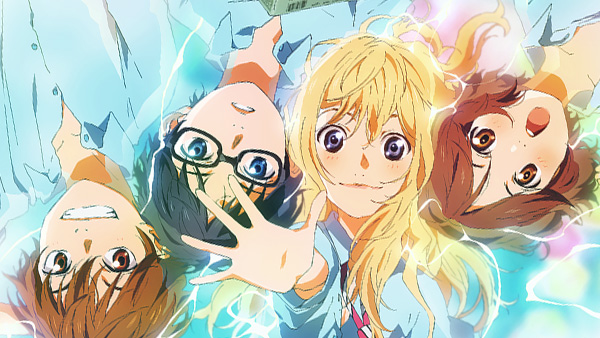 Your Lie in April (四月は君の嘘 Shigatsu wa Kimi no Uso) is a music manga series by Naoshi Arakawa, with an anime adaptation by A-1 Pictures.

The story follows a piano child prodigy named Kōsei Arima, famous among his fellow child musicians for playing piano notes with utmost perfection on competitions. However, his mother died of an illness two years ago and this has caused a mental breakdown for Arima. This traumatic experience led to him being unable to hear the sound of his piano playing anymore.

Today, he still views the world in monotone and seems content with his life without music together with his friends, Tsubaki and Watari. This rhythm is disrupted when she meets Miyazono Kaori, a pretty girl of his age and a free spirited violinist. Together with Kaori and his friends, Arima is again plunged into the colorful world of music he left two years ago.

The manga and anime focuses on Arima's is internal struggle, as he tries once more to view the world in vibrant colors and adapt a playing style entirely opposite to his original structured playing. These four teenagers tackle the world of music, friendship and love as they grow closer to each other through their adventures.

The Manga began serialization in Monthly Shōnen Magazine in May 2011. A-1 Pictures began airing their Anime adaptation of the Manga Series in October 2014 with Crunchyroll streaming the series in English Subtitles

What exactly was the "lie" in April?

What is the name of the background music that plays before Kaori and Kousei's performance?

What music was Kousei playing in the first episode?

Performers of classical music in Shigatsu wa Kimi no Uso