What does Major Kusanagi whisper to Batou at the end of episode 25 of GITS SAC?

What is Motoko whispering to Batou in the end of the first series?

This is the scene where Motoko and Batou are ambushed by the Section 9 extermination squad. Motoko is the prime target and is ordered to be eliminated. Sniper on a helicopter shoots Motoko in the head, but before that Batou notices the red laser sight dot and alerts Motoko, to which she silently responds with the phrase in question. Since she's very calm about all this, I suppose it's something along the lines of "Survive".

In Japan, there's a TV program on BS2 channel called BSアニメ夜話 (BS Anime Night Talks), and on 26 February 2009, it's talking about Ghost in the Shell: Stand Alone Complex.

Regarding that scene, the original storyboard revealed that she was supposed to say "na-a-ni". With cold expression, Major Kusanagi didn't convey anything to Batou even in that situation. Toshio Okada (anime producer & co-founder and former president of Gainax) responded with「ドSねーちゃんですね」("She is a very sadistic girl, eh.")

Fun fact: before this information was revealed, many Japanese fans theorized that she was actually saying 「と・け・い」 (to-ke-i, "(Wrist)watch") because

she tried to tell Batou that she wasn't wearing a watch, which means that she was not the real Major Kusanagi, only a body double of her. 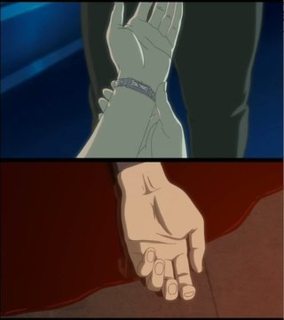 Not the answer you're looking for? Browse other questions tagged ghost-in-the-shell-sac or ask your own question.

1
What is the music playing in the background of the fight scene in episode 7?
6
Why did Major Kusanagi wear a particular extreme outfit on episode 14?
2
Song in episode 14 of Ghost in the shell SAC 2nd gig