Ask Question
Asked 7 years, 9 months ago
Modified 5 years, 1 month ago
Viewed 2k times
17
votes
This question was closed because it is a type of identification request that is disallowed by the community. It is not currently accepting answers.

I am searching for a manga/manhwa that I read 10 years ago.

I don't know if it was manga or manhwa because it was in Hong Kong and translated into Chinese. It was in one of those weekly "Jump" magazine.

From the first few chapters

On the way to school, the main character wanted to buy a birthday gift for his neighbor girl. He was drawn/called to a jewelry store, where he found a large bracelet with one huge diamond and one black stone. He didn't have enough money so the store owner sold him just the diamond part of the bracelet. After he left, black shadows came out of the black stone, killed the store owner, and burned down the store.

At school, one of the schoolmates of the main character wanted to see the bracelet and put it on the main character's arm, and the bracelet fused onto his arm. He got another gift for the girl (a dolphin ring) and she happily accepted it. The adopted brother of girl is the typical good looks, good grades, idol of all the girls type of character. He was super jealous that the girl chose the dolphin ring over the diamond ring he gave her. He was also drawn/called to the same jewelry store, now burnt to ashes.

The black stone threw itself into his eye and fused with it.

Later in the story

There is a jade necklace that can communicate with plants. A moon stone that gives werewolf like ability. A ruby that manipulates gravity. A blue stone that heals and more. 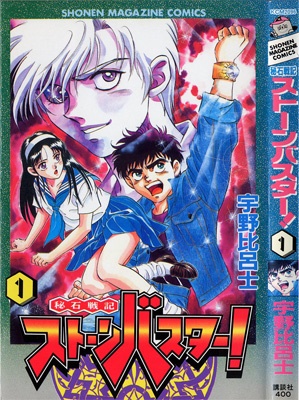 Unfortunately, I can not find an English summary online. If you read Chinese, Baidu Baike has a very brief synopsis. The manga was serialized in Shuukan Shounen Magazine.

Black shadows came out of the black stone, killed the store owner, and burned down the store.

See page 34. The store owner is saying: "My body is dissolving?"

The black stone threw itself into his eye and fused with it.

He got another gift for the girl (a dolphin ring) and she happily accepted it.

Later in the story:

The guy with a jade necklace that can communicate with plants and the vampire with a ruby that manipulates gravity both appear in volume 3. The werewolf guy appears in volume 2. The monk with a blue stone that heals appears in volume 4.

Not the answer you're looking for? Browse other questions tagged hiseki-senki-stone-buster .