Is there a 2nd season for Angel Beats?

I've watched the epilogue of Angel Beats, and it seems Otonashi and Kanade have been reincarnated to meet each other on the street in the real world. In an alternative epilogue, Otonashi is shown to have stayed behind in the afterlife to help people pass on.

No, there will be no second season. There is no more story than the one which was released.

List of all the episodes and one OVA here

Key are planning a game based on Angel Beats series. This doesn't mean they are going to do a second season, but, it's possible in a far future.

Kazamatsuri.org recently Posted last April that there will be a second season to the anime. 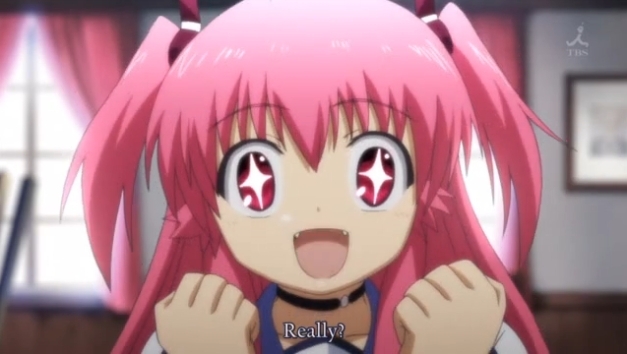 You didn't read that wrong.

After many years of want with no new content in the Angel Beats! universe, the fans can finally get more of that wonderful Yui-nyan they so desire. Ignored no longer, tried and true fans of this magnificent series are set to be blessed with another dose of magical Key feels!

Key has taken into consideration many things that they learned from the production of the first season and are looking to make various improvements going forward. In interview, Key stated that many fans found themselves, "despite finding the series perfect, feeling like the length and pacing of the show was in question." To counteract this major issue, Key have promised not to let things drag on this time around and are shooting for a seven episode anime. Furthermore, critiques seemed to mention the title's lack of character development- So, to balance things out, Key will be adding three times the cast with new characters designed by Itaru Hinoni's moe.

The last bit of information we've gotten in this news release is that due to wishes for Key to work with its older animation studios, Toei Animation will be handling this next season. Concept art can be seen below. 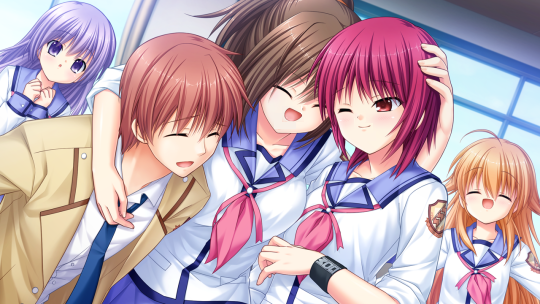 But, to many readers' dismay It was an April fool's joke.

Althought this site was considered a reliable one, an admin happilly posted:

We have a valid excuse to lessen our own reliability on only one day every year. Live a little :wink:

Here is a screetshot of a magazine talking about AngelBeats! Season 2 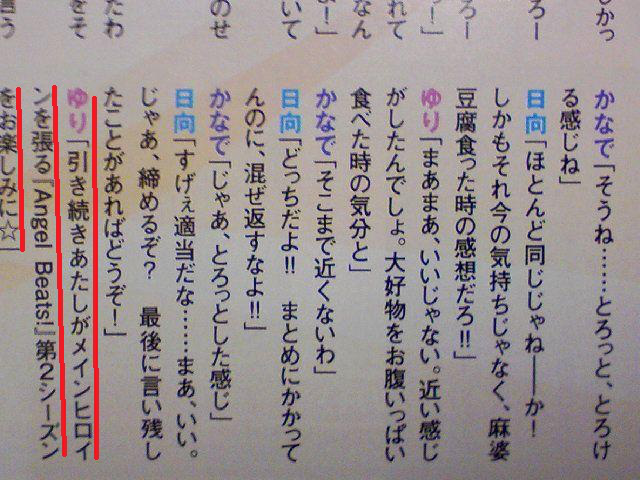 The picture is probably from MEGAMI magazine as well, and it basically has Hinata, Yuri and Kanade in a conversation, talking about mapo tofu. Hinata (the one in blue text) asks if anyone has any last words to say before the end, and Yuri (The text to the left of the red lines):

Look out for the Angel Beats! Second Season where Iâ€™ll return as the heroine!

Iâ€™m also a few days late in reporting this, so it might have turned out to be a practical joke.

Take this with a grain of salt, but I personally donâ€™t want a second season â€“ it ended fine, as is.

So In your question:

the answer [as of the time this post] is typically NO, there is no Second Season of Angel Beats!

Anything you find in the Web, pertaining to the second season would either be just a joke (like what the post with yui did) or an just April Fools (like Kazamatsuri.org posted last April).

Thank You for reading :)

Not the answer you're looking for? Browse other questions tagged angel-beats .

8
Is it true that Angel Beats was originally set for 2 cours before being cut down to 1?
4
How does the Angel Beats special episode connect with the main storyline?
8
Why couldn't Otonashi of Angel Beats pass on?
11
How do Otonashi and Kanade remember Iwasawa's last song in their next life?
5
Why did Angel and Otonashi want to pass on and make others pass on?
6
Who is the mysterious Programmer of Angel Beats?
7
What do the "Beats" in Angel Beats! mean?