What does it mean the “Tacos” t-shirt of Krilin?

In Dragon Ball Super Krilin uses a t-shirt with a "Tacos" inscription. What does it mean? It's the mexican Tacos food, or is it the japanese "Takos" (which I guess it could also be written tacos which means octopuses which are eaten in Japan) or is it something else? 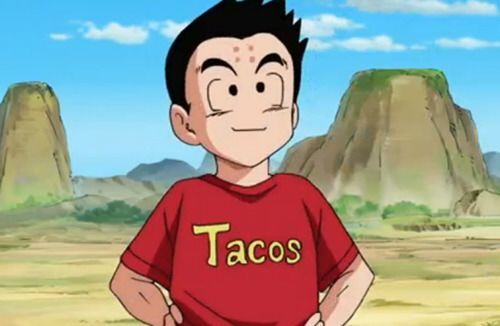 This is an interesting question. I would say it's definitely one out of these 3 possibilities,

Personally, I would like to think they gave it some thought and it was perhaps chosen on account of the first reason. However, it could very likely be for absolutely no reason at all and something only the artists know.

Not the answer you're looking for? Browse other questions tagged dragon-ball-series dragon-ball-super japanese-language or ask your own question.

3
What do the abbreviations mean in Dragon Ball Z?
0
Do the events of the Dragon Ball movies happen to some extent in the series?
3
Did Krilin get god ki?
0
What does this borderline ki first Krilin and now Goku get mean?
0
What did Vegeta mean with “be careful Kakaroto, that could be the super saiyajin true form!”?
0
Does the mastered super saiyan blue exists in the anime?
1
Is Broly canon now? (Dragon Ball Super Broly movie)
2
Did Goku use kaioken in chapter #39 of the manga?