Is it true that Toei mentioned 3 months ago that Caulifla has an infinite power/potential?

This video from a Spanish speaking dragon ball youtuber with close to 900,000 subscribers mentions Toei has said in a Trailer Caulifla potential is infinite.

This another video from a spanish speaking dragon ball youtuber with close to 600,000 suscribers also mentions Toei released a video 3 months ago saying than Caulifla has an infinite potential.

Now I havent found the original video which is in japanese, but this screencapture from the video shows in japanese the word "power" and the word "infinite" next to an image of Caulifla 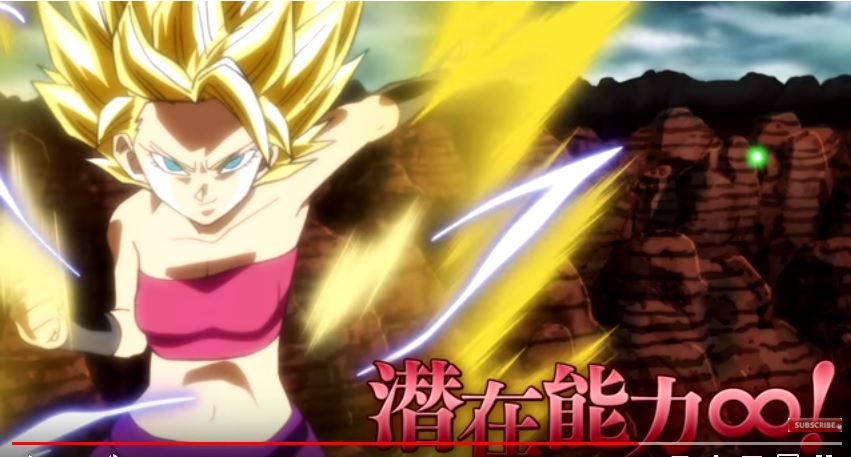 What does that original video from Toei says, have anyone seen it? Or at least this japanese text? is it Caulifla power infinite?

That was a trailer teasing the fight between two new female super saiyans from universe 6.

In this context it's simply says that Caulifla has infinite hidden potential waiting to be awaken.

It's too much of a stretch to assume Caulifla's power is infinite. What would've possibly been implied is that she's got so much potential she hasn't tapped into. I believe Caulifla and Cabba are the counterparts of Goku and Vegeta in Universe 6, however with opposite personalities. Cabba like Vegeta is gifted, however not as gifted as Caulifla and needs to work a lot harder but at the same time has Goku's personality. Caulifla on the other hand, is like Goku who is a lot gifted and doesn't need to work as hard to get stronger and she has Vegeta's cocky and arrogant personality.

In other words, what I believe is that Caulifla good quite possibly be the fighter across the multiverse with the highest potential. That doesn't imply she has infinite power. Vegeta stated Gohan was the fighter with the highest latent ability he's come across. By that he implies gohan's potential exceeds his and Goku's. So if Gohan were to train as much as his father and Vegeta, he'd end up becoming a lot more stronger faster.

In other words, what Caulifla has is infinite potential, not infinite power. Hence the harder she trains, she could end up becoming stronger at a very rapid rate(Maybe even faster than golden freiza and Gohan).

Not the answer you're looking for? Browse other questions tagged dragon-ball-series dragon-ball-super japanese-language or ask your own question.

1
Does the Chobits title "ちょびっツ" intentionally look like the word "STUDY"?
6
Was "defenestrated" simply a literal translation, or part of a bigger concept or joke?
3
Goku new transformation grey eyes light blue aura is it related with the other picture released?
4
Is super saiyan god a "super saiyan" transformation, or does just it have a missleading name?
0
Goku SSJ Berserker in Dragon Ball Heroes?
1
Is the Dragon Ball Super manga "more faithful" to Akira Toriyama ideas than the anime?
2
Did Goku use kaioken in chapter #39 of the manga?
2
Has Dragon Ball Super Broly changed the original Dragon Ball story?