Does Trunks ever pretend to be weaker than Vegeta so as not to hurt his pride?

This is a question regarding the anime but any reference from the manga are also acceptable. Please include season/episode, etc.

Vegeta's pride is a recurring theme and fuels his rage during fights. He demonstrates this by toying with his enemies, letting his opponents beat on him until they discover for themselves how weak they are, and by letting his enemies power up or transform so that he isn't fighting a weaker enemy.

I seem to recall there being a point at which Vegeta realized that Goku was holding back so as not to hurt his pride and this angered him immensely; I think it was around the time Goku demonstrated his SSJ3 form and was a catalyst for Vegeta willingly allowing himself to be turned into Majin Vegeta.

But is there an instance where Trunks also suppresses his power out of fear that his father will resent him for surpassing him just as Goku always does? This question occurred to be while watching Vegeta fighting Cell after having trained in the Hyperbolic Time Chamber. He repeatedly refers to Trunks as being strong but never as strong as himself.

A citation for Vegeta realizing that Goku was stronger would also be nice as a supporting reference but I am seeking answers specifically regarding Trunks.

Trunks actually said in the place of the anime you mentioned - when Vegeta battled the perfect Cell - that he surpassed Vegeta's power, but didn't told Vegeta since he didn't want to hurt his pride, he's telling this to Kuririn after being noted that he's been stronger than Vegeta, Trunks tells Kuririn that though Vegeta surpassed the SSJ level, he surpassed even that. 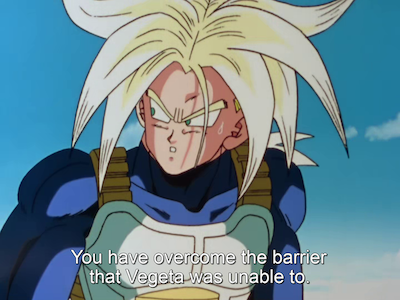 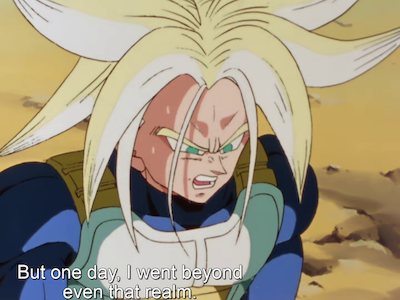 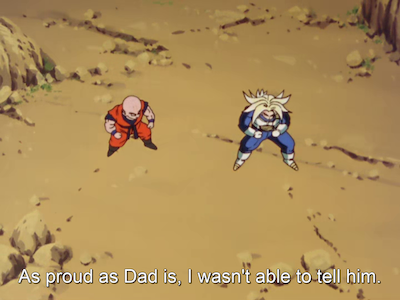 That being said, in his fight against Cell he found out that his level beyond that realm Vegeta could have acquired or maybe has, but didn't made that in the fight against Cell since it forces the user to power up the muscles and by doing that reducing the user speed.

2
How does Gohan inherit his "Mystic" power while others do not?
3
Did Vegeta ever called Goku his earth name "Goku" in Japanese dub?