In the last episode I believe of the first season of Attack on Titan, they showed a titan in the wall. In addition, it looked like there was not much room between the actual wall part and the titan's face. So do titans breathe? Do they need to breathe?

Possible spoiler alert (depending on how accurate some of the interpretrations in the anthology were)!

So, late last year, Kodansha Comics released the Attack on Titan Anthology. If you're unfamiliar with it, the creators of Attack on Titan and some famous western artists basically got together and created this mash-up anthology with all of their interpretations of the AoT universe. Some of the pieces in the anthology were just straight up cross-over style pieces like the ones created by Evan Dorkin, featuring references to characters in other universes and such. But, for a lot of the pieces in the anthology, the material was actually extremely relevant to the series and revealed some interesting things. For those of you that have not started in on the Anthology yet, there's a spoiler for it below.

On page 7 of Volume 1 of the Attack on Titan Anthology, a Q&A section reveals that one of the main subject pieces for Michael Oeming was a titan featuring transparent skin. Moving to page 8 of the same volume, you will find the see-through titan. As you might imagine from the story, it did have a digestive system but it was poorly developed and had absolutely no exit. The entrance and exit to the digestive system were the same place: the mouth. What would be of interest to you here is that when this titan was drawn, it featured only a poorly developed digestive system, no heart, no lungs, and no other major organs. We know that at least the digestive system was drawn to reflect knowledge found in both anime and manga, and it would not be a far leap to say that this is an accurate rendering of all organs within the titan's body, not just the digestive tract. Since the titan has no lungs in the picture, the titan likely does not need to breathe to survive.

But it's not enough to make assumptions, and on page 8 Michael Oeming states:

There is a lot of nuance to the story. The history is rich and deep, both with the characters and the actual history of the Survey Corps, the geography, and even the different Walls. So writing a fresh story that hopefully expands the world when it is already so tightly written was a challenge. Luckily, my editors were a big help with the history and specifics.

So, from his answer in the Q&A session, this rendering of the see-through titan wasn't just a re-interpretation or a cross-ever, it was a segment that expanded on the current AoT universe using existing knowledge of the universe.

And, from episode 25 of Attack on Titan we see that, as mentioned above:

There are titans literally hanging out inside the sealed walls. So, it makes perfect sense that they didn't suffocate inside the walls. They have no need to breathe since they have no lungs with which to breathe!

This means that it is highly likely that the see-through titan is an accurate representation of what the titan's organs would look like if the skin were transparent. That is to say, titans likely have no lungs and therefore can not breathe or suffocate. 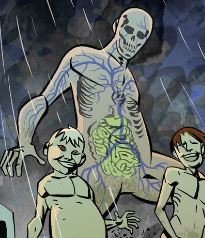 25
How did humans learn how to kill Titans?
1
Why weren't the Titans visible when the Armored Titan broke through Wall Maria?
0
How was wall Rose breached in season 2 of Attack on Titan?
1
Why isn't the Beast Titan at the start of season 3?
0
Were the War Hammer Titan and the Cart Titan ever shown in the anime?
4
Why didn't Eren Yeager saw the Key before in Attack on Titans?
2
Why did the Survey Corps search along the wall instead of on top of the wall to find a hole in the wall?
1
What was the purpose of turning Eldians into titans in the anime season 2?
1
Why Willy Tybur claimed Eren could attack using the colossus Titans in the walls, if supposedly Eren can't control that ability?