What do the oddly positioned letters in "Death Note" title mean? 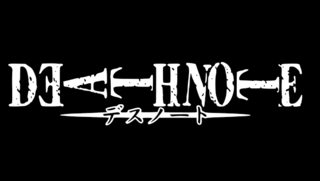 It's easy to see people or objects (i.e. weapons as mentioned on filistinist's answer) in the letters after tilting them sideways.

It kind of looks like the E's are brackets. If you focus on everything in between, it looks like an arrow piercing H, N, and O. The last T's head is showing a point of impact. And though it might be weird to imagine, if you see the O as a breast and the H as someone's back, it makes it seem like the N is the one feeling the effect of the arrow first. Since the N is in between the two, you could say it's a heart. The N, or heart, being the first to be affected by the "arrow of letters" could be hinting towards how Light writes down the names of his victims as they die in his signature killing style: a heart attack.

It's really just speculation, though; I could be wrong. It seems fitting to me though.

If you didn't see the E's as brackets, then the last E could be the feathers of the arrow, and the first E could be a shield to stop the arrow's path. Why would there be a shield there? Well, look at what would be using the shield. A D, for "death". The one thing that would stop Light's arrow of fatal words would be his own death.

That's all that I was able to come up with, but I think it's pretty plausible now.

The rotated letters could symbolize an arrow through the chemical symbol, HNO, of nitroxyl, which has been found to cure/treat heart failure. This analysis is just a theory, though.