What novel's introduction was Shiori imitating?

In episode 6 of the third season (or chapter 147) of The World God Only Knows, Shiori starts writing her story but scraps the introduction she wrote because it was imitating some other novel.

Does anyone know what novel she was referring to?

Here's a screenshot of what she wrote: 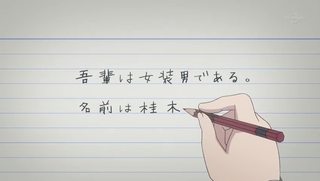 This roughly translates to:

My name is Katsuragi

I believe this is a reference to the novel "I am a Cat" (吾輩は猫である, Wagahai wa neko dearu) by author Natsume Souseki. It's opening sentences are the following:

which, translated into English, is:

The reference is more apparent if we compare the two in Japanese. The grammatical structure of the sentences is very similar:

All the words other than the nouns are the same. The use of 吾輩 (wagahai) for "I", である (dearu) as a sentence-ending phrase would both be strange in modern writing. In addition, the general structure of the two sentences are similar enough that this is almost certainly not a coincidence.

The novel is very popular in Japan, being Natsume's first major literary work and one of his top three most read (the other two are Kokoro and Botchan), and Natsume himself being in all likelihood the most important writer in Japanese history. It would not be strange at all for it to be referenced here.

8
What are the differences between the original and the light novels' story of The World God Only Knows?
11
What does this haiku in The World Only God Knows mean?
8
What does Tenri whisper to Diana?
8
What did Elsie type at the first try?
4
What are the drawbacks of being possessed by a Loose Soul?
6
What is the meaning behind the anime title "The World God only Knows"?
2
Did Elsie catch the runaway spirit (kaketama) that was in Nagase Jun?