What does Tenri whisper to Diana?

In episode 12, season 3 of the anime The World God Only Knows, there's a scene at around 5:14 where Tenri speaks to Diana and tells her something surprising. Diana responds by exclaiming why Tenri didn't say anything before.

The next time we see Diana she has wings.

I'm guessing Tenri told Diana something that would promote their relationship with Keima, because she grew wings, but since Diana has been with Tenri ever since she was a little girl, I'm not sure what Tenri could've told Diana that would be so surprising.

Posting as answer because can't use spoilers in comments, still just a speculation...

With the recent development in the manga, it seems it might be something along the lines of:

Keima is the one that chose me to be your host

Also, remember Diana grew her wings once before (although they didn't notice), in manga Chapter 139 (can't remember which episode), after Keima apologizes to her in his library.

I'm going to keep the spoiler at minimum. This is from Heart of Jupiter Arc, the last arc of the series.

What she said to Diana is... 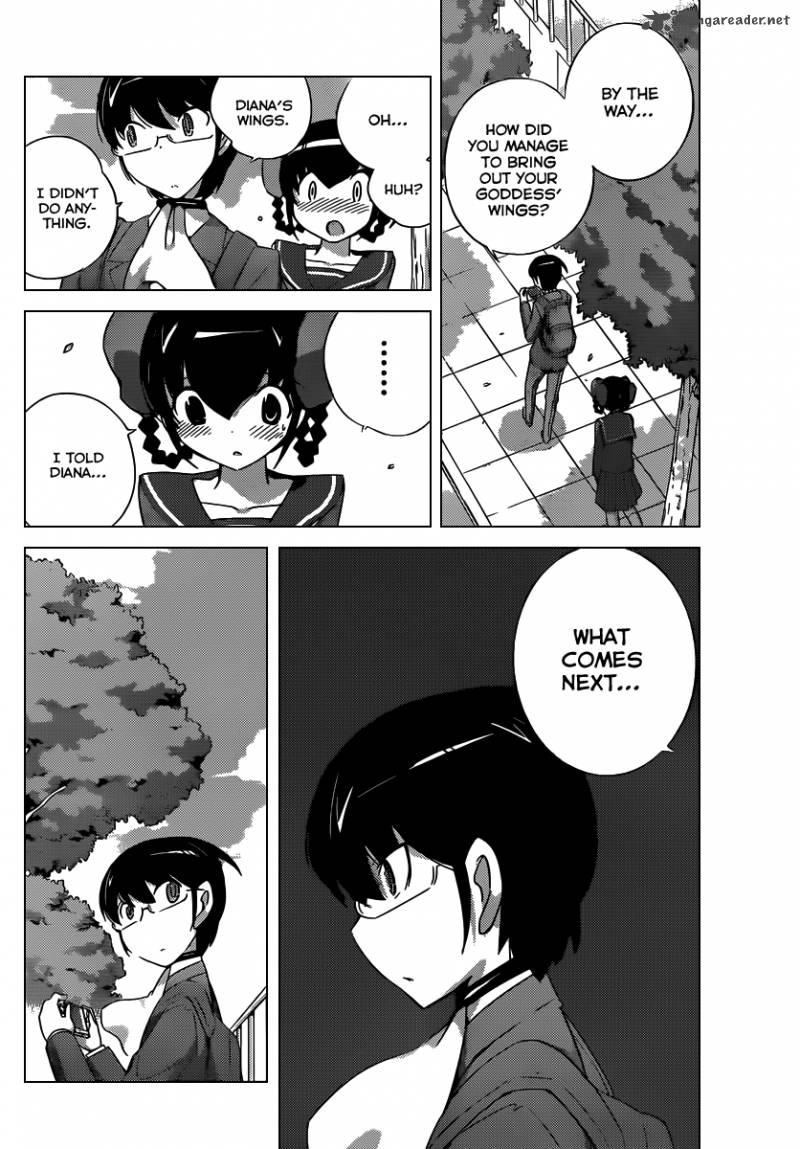 This arc tells about Keima being sent to the past. Tenri probably explained Diana about the event that happen 10 years ago, about how Tenri and Keima got involved with the mass escape of the runaway spirits, and how it will affect the future.

Tenri PROBABLY doesn't love Keima as much as Diana thought she did. Tenri might have said she doesn't like Keima.

With Tenri's confession to Diana in episode 12, Diana grew her wings.

From a common viewer.

8
What are the differences between the original and the light novels' story of The World God Only Knows?
5
Does the Magical Star Kanon 100% spinoff fit canonically within the main series?
11
What does this haiku in The World Only God Knows mean?
13
What novel's introduction was Shiori imitating?
8
What did Elsie type at the first try?
4
What are the drawbacks of being possessed by a Loose Soul?
4
Does Keima's mother know Elsie and/or Haqua's real identity?
6
How many girls does the main character conquer?
6
What is the meaning behind the anime title "The World God only Knows"?