How can they tell the difference between NPCs and humans?

How can they identify whether a student is an NPC or not? Is that because they act differently than NPCs? But what if the student doesn't remember anything (amnesia) and does everything and accepts everything as normal? In that case, can they tell the difference?

The only way for them to know that someone is human is if they deviate from how an NPC does stuff and if they don't recognize persons who have recently arrived in the Afterlife.

Basically if you live like an NPC then you must be an NPC. Hinata actually thought Ooyama was an NPC because Ooyama acted so normally that he was like an NPC which is why Hinata gave him a nickname of "Villager A" in their first meeting (he only calls Ooyama by that name in his thoughts). However, when Hinata had a good conversation with Ooyama, Ooyama said something about dying which showed that he was a human who died.

Yurippe knew Hinata was human because he would always go to the school roof (if memory serves right) which is not something an NPC does.

When all hell breaks lose in the campus and a person dismisses it as something normal, then that person is an NPC because anything weird that they see is supposed to be normal (at least, they think it's normal).

They act differently. Yes. They will still act differently (like by being curious). They can't tell the difference if they can't observe or experiment if the person will act how a non NPC would act.

There is one important dissimilarity the other answers didn't cover: the NPCs forget things they were told the next day, as revealed in volume 5 of the Angel Beats! Heaven's Door manga. 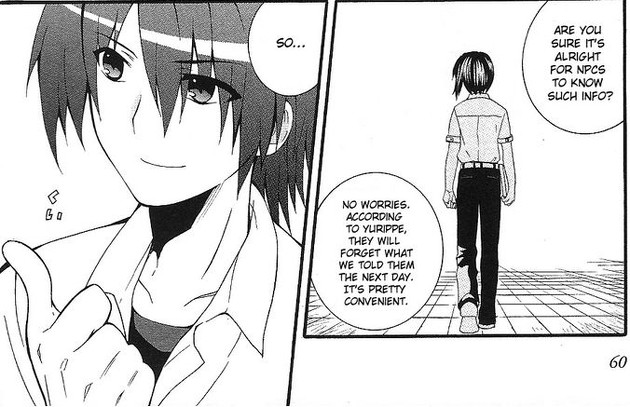 It should be noted that the NPCs do retain a record of the past activities done by the humans, as Yuri and her SSS comrades were denied participation in the Christmas party because they were labelled as problem students for causing a ruckus at the swimming competition. Also, the NPCs don't forget what they have experienced, like the principal was aware that he had been held as a hostage many times in the past.

5
What are the paintings in the Anti-Angel Headquarters and what do they mean?
1
Is there any humor or meaning to the conversation about Yuri's dream and how many Hinatas there were?
4
Is there any connection between Otonashi and the first NPC?
3
Can we roughly determine the dates and duration of Otonashi's stay in the Afterlife World?
6
Who is the mysterious Programmer of Angel Beats?