Neon Genesis Evangelion (also Evangelion or EVA), is a sci-fi mecha anime by studio Gainax written and directed by Hideaki Anno. The world will end if Eva pilots can't stop the Angels from reaching Lilith, protected by NERV corporation on Tokyo-3 - the last stronghold of mankind. 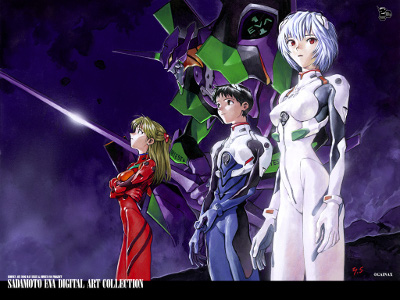 Neon Genesis Evangelion (新世紀エヴァンゲリオン) is a Japanese media franchise created and owned by Gainax. Most of the franchise features an apocalyptic Organic lifeforms action story, which revolves around the efforts by the paramilitary organization NERV to fight hostile beings called Angels, using giant humanoids called Evangelions that are piloted by select teenagers (of whom Shinji Ikari is the primary protagonist). Other works deviate from this theme to varying degrees, focusing more on romantic interactions between the characters, side stories which did not appear in the original works, and/or reimaginings of the conflicts from the original works. Most recently, a new series of 4 movies are being made by Studio Khara (often times referred to as "Rebuild" in English) that retells the story of the original anime TV Series.

This tag should be used in questions that regard any of the media from the Neon Genesis Evangelion franchise. Special attention should be payed to the Rebuild series, the Death & Rebirth and The End of Evangelion, where this, this and this meta posts should be consulted.

In Neon Genesis Evangelion, why are Angels attacking?

What is the purpose of the Human Instrumentality Project?

What, if anything, was the early 90s anime creativity crisis?

What is the meaning/purpose of the (not) in the titles of Rebuild of Evangelion?