What is the Japanese word they are talking about?

In EtoTama ep 4, around 11:40, Rabbit introduces herself as a Production Pro, or "P.P.". Boar then goes and gently pushes the 4th curtain aside (note: it is just episode 4 and there is no longer a 4th wall standing in that series) and says:

I wonder if she realizes that abbreviation sounds like it's meant to censor a word we can't say on air. 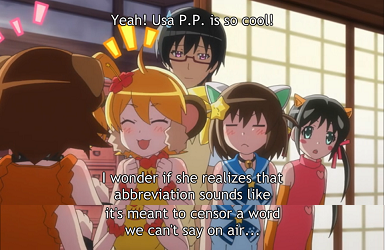 What word is Boar talking about?

japanese-language etotama
Share
Improve this question
edited May 5 '15 at 2:30

「P」 is a common Japanese name suffix, so there is arguably a play-on-words going on here too. You can add it to any person's name (first name or last name, male or female, though it is more often used for females). It is a cute and informal suffix for a friend.

For example, the 「P」 suffix is used in Sailor Moon. Usagi calls Minako 「みなP」(Mina-P), and Chibi-usa calls her cat-face robot「ルナＰ」(Luna-P). The mangaka's editor 小佐野文雄 (Osano Fumio), goes by the nickname "Osa-P" in real life. The jewelry store in the series, 「ジュエリＯＳＡ＊Ｐ」, is named after him.

To give yourself a nickname suffix, and to double a 「P」suffix into two back-to-back Ps is likely to portray Usa's character as ultra-cute and cutsey (「うさ」 Usa, short for rabbit, 「兎」 usagi + 「P」+「P」). Japanese onomatopoeia (擬態語, gitaigo; 擬音語, giongo, and 擬態語, gitaigo) often (though not always) repeats one or two syllables next to each other, and is considered to have a cute sound.

Boar's Fourth Wall comment indicates that Usa only has the 「P」suffix, in mind, but that the audience knows that 「ビーッ」 (piiii) is the sound effect (擬音語) of a high-pitched computer error sound, such as a censor bleep for television broadcast.

The Japanese onomatopoeia for the sound that a censor bleep makes is ピー pii, which happens to also be the pronunciation of the letter "P". Hence, "Usa P.P." sounds not entirely unlike "Usa <BLEEP> <BLEEP>" to the Japanese listener.

Not the answer you're looking for? Browse other questions tagged japanese-language etotama or ask your own question.