What is Japanese version of the pun word, “slife”? … and term for adult friend?

At time code 21:40 of Episode 1 of That Time I Got Reincarnated as a Slime, the protagonist Satoru refers to his new life as a slime as a "slife" (sub). I'm guessing there was similar word play in Japanese. Could someone explain what it was? 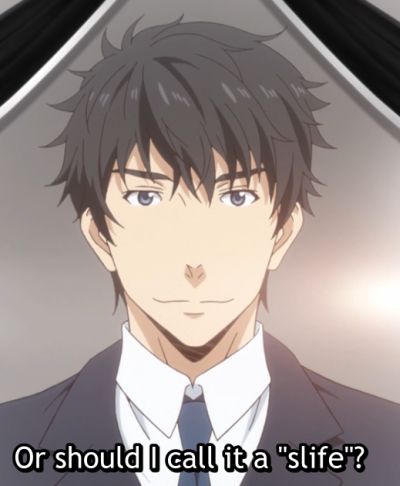 Also, just prior to that he had made friends with a dragon, but as a 37-year-old (former) human, seemed embarrassed to use the term "friends". Does Japanese tend to use a different term than "friend" for adults? I get the impression Satoru thinks the term would normally be used by kids and teenagers.

'Slife' is an accurate portmanteau here. Since it's Slime + Life.

Friends are friends regardless of age. There are more formal words like 友人 (yujin), but how it's used is circumstantial and highly contextual in nature.

Not the answer you're looking for? Browse other questions tagged japanese-language reincarnated-as-a-slime or ask your own question.

6
What is the Japanese word they are talking about?
11
What are the “Angels” called in the original Japanese version?
9
Are there any Japanese words for “deport” and “incest” that sound similar enough for a bird brain to confuse?
5
Why does Kojirou say “white hole” in the Japanese version of Team Rocket's motto?
8
The pun worked in English, but what was it in Japanese?
3
What is the meaning and significance of the word “Sunagimo Umataro” (砂肝うま太郎) in Yuyushiki?
2
Why did the storm dragon's name change from Verudora to Veldora in the anime?
6
What is the context for Rimuru's joke about taking five minutes for the audience to quiet down?
3
What does the word “jiken” on young Luffy's shirt mean in Japanese?
1
What is the Japanese term for an old man/grandpa who is into anime/is otaku?