Is the Merlion in Faye's childhood video a real location?

In this MAL discussion about episode 24 of Cowboy Bebop, the user merle_noir posts that they have been to the Merlion seen in Faye's video:

Faye must be Singaporean... Wouldn't think the Merlion would be anywhere but there (in Singapore), and I even know/have been to the first Merlion she saw - the one in the video.

Is this a real, visitable place? If so, what is the location?

The Merlion is often associated with Singapore, so the extrapolation that Faye is Singaporean is reasonable. However, the exact location of the Merlion in Cowboy Bebop is less immediately clear to a contemporary viewer not from Singapore. In the ep. 24 video where it appears, there is a waterfront, and a merlion at the end of a boardwalk. (Click images for bigger size.) 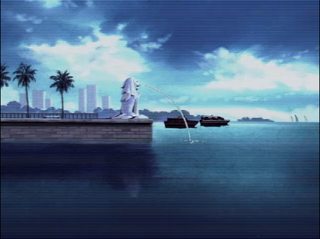 According to Wikipedia, there are five "official" Merlion statues in Singapore; it seems reasonable to restrict my attention to these. The only one that could fit the merlion in Cowboy Bebop is the one in Merlion Park which stands at the mouth of the Singapore River. (The others do not have waterfront views.) The Merlion Park statue is also the oldest merlion statue in Singapore, and possibly the most famous one, so it's likely that this statue would have been chosen for reference. 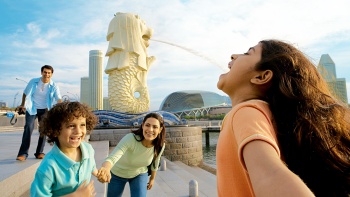 One might notice that the location doesn't entirely match up. In Faye's video, there is nothing to the right of the boardwalk the Merlion is on, whereas in current images, there is a set of steps and no boardwalk. However, the position in Faye's video matches up with the original position of the Merlion. (Reference) (The Merlion Park statue was moved in 2002 after construction affected the seafront views and the positioning relative to the Singapore River. Seeing that Cowboy Bebop was produced in 1999, there is no reason for Faye's video to show the merlion in anything but its former location.) 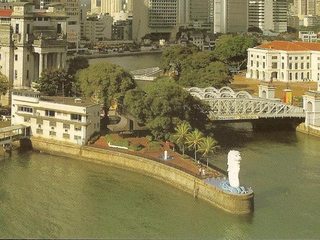 Not the answer you're looking for? Browse other questions tagged cowboy-bebop tourism .