So, when Kaneki tried to eat Hide, Touka took him on, and, according to Yoshimura, beat the *#@$ out of him. However, I feel like it wasn't a fair fight, seeing as Kaneki didn't know anything about how to use his kagune, what type of kagune Touka had, or even what types he was weak against. So, inexperienced and untrained as he was, Kaneki was obviously no match for someone who was familiar with their kagune and knew how to use it, therefore Touka had a guaranteed victory.

Who would win in a death match between the two?

If an experienced Rinkaku and equally experienced Ukaku went for each other, Rinkaku would have a higher chance of winning. They are only weak against Bikaku. In Chapter 13 of Tokyo Ghoul,

Shinohara explained this to Suzuya: 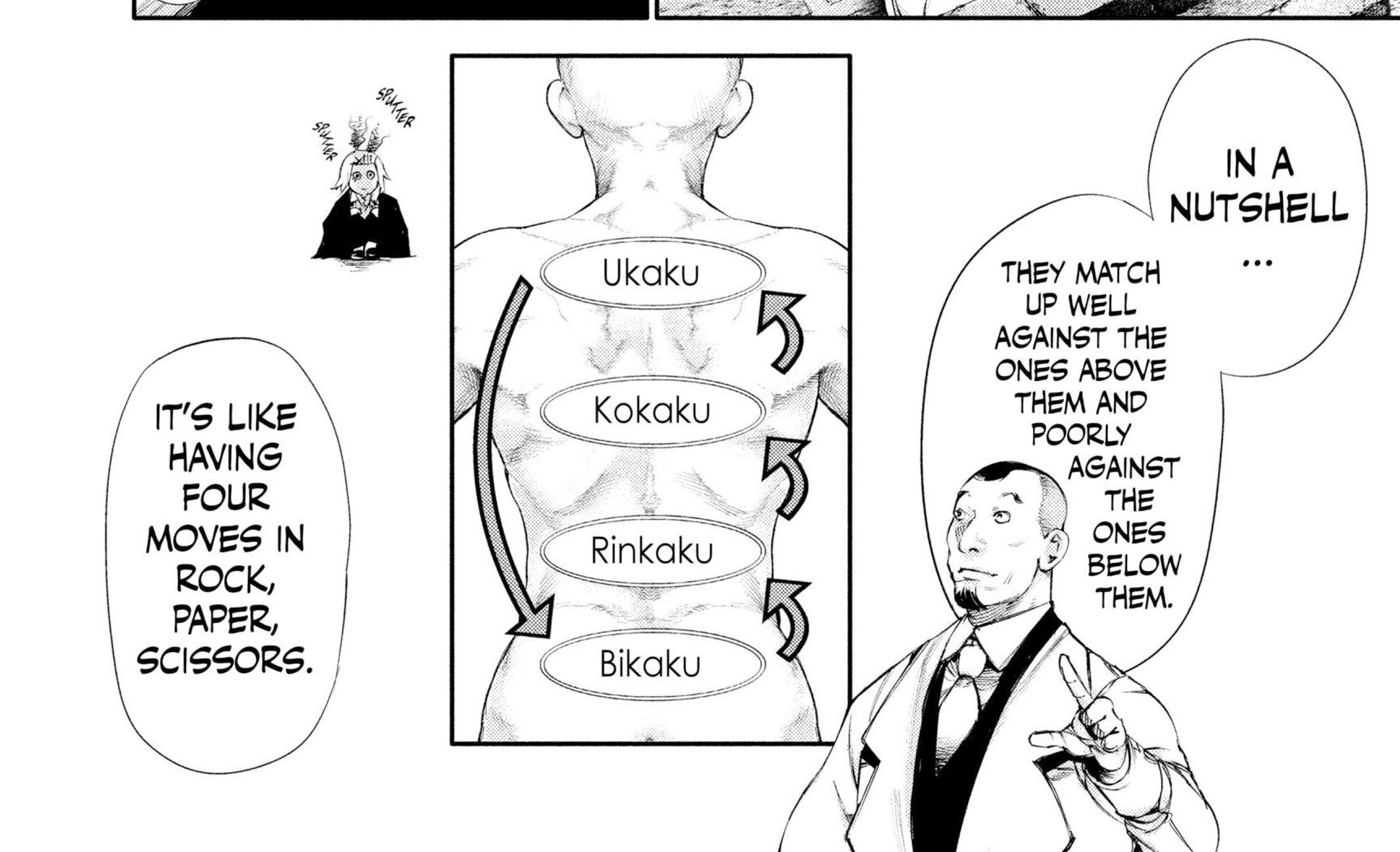 Furthermore, on the same chapter,

Shinohara said that RC cells of ghouls acts as an effective 'poison' to the types that are weak against them.

I would like to answer this question with my own hypothesis. I haven't done much research on Tokyo Ghoul combat but I have my fair share of knowledge on the subject.

A Rinkaku ghoul would have a higher chance of defeating an Ukaku ghoul in a one versus one situation. Their kagunes are quite brittle but by hardening their Rinkaku (similar to how Ukaku kagunes enter a crystallization state when firing), they could defend themselves against the Ukaku onslaught.

However, if the Rinkaku would attempt to focus on fighting the opponent at range, the further the Rinkaku tentacle stretches, the more it becomes weaker as kagunes are based on muscles. The further a muscle has been stretched, it could experience tearing or getting weaker.

This means at a certain point, the Ukaku could be able to pierce through the hard shell of the Rinkaku kagune. But this is potentially a harder risk for an Ukaku due to fighting at range, they would have to constantly avoid the Rinkaku kagune.

5
Is there a uncensored version of Tokyo Ghoul?
10
What does it take to kill a Ghoul?
0
What is Tokyo Ghoul RA?
0
Will Mr. Mado return in Tokyo Ghoul Re?
2
Could a koukaku ghoul be fast?
1
Could Haise Sasaki regain his memories if he accepted his ghoul side?
1
How did Seido Takizawa become a Ghoul?
0
What are the differences between a half Ghoul and a Ghoul other than having one human eye and a Ghoul eye?
3
Can Ken Kaneki from Tokyo Ghoul self cannibalize?