Where is Yoruichi's Zanpakuto?

Since the beginning, we see Yoroichi does not wield a Zanpakuto, but isn't it strange? Isn't she a Shinigami and the Zanpakuto is so important for them?

There was some flashback moments when we saw younger Yoroichi wielding a Zanpakuto: 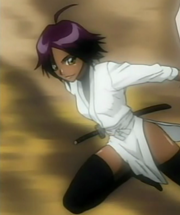 I imagine she had Shikai/Bankai to become a Captain, so she should be stronger if she uses it in a fight. Maybe she has lost it or something?

There are many THEORIES as to what happened to her Zanpakuto. I'm not sure if I can ANSWER your question as definitely as you'd like, but I can list some possible answers. It's up to you to find the one that you believe most plausible. Or we can wait til old Tite Kubo gives us the answer.

Those are just some theories. I believe she wouldn't have gotten rid of it. I think she would've done what Kisuke did. Personally, I think we'll see it one day, along with her Bankai. Sorry that I couldn't answer your question.

While there is no definitive answer at this point many of the theories out there are plausible. I however, personally think that one of the most overlooked and underestimated answers is that she simply doesn't like/want to use it. Much to the same affect as to why Sui Feng does not like using her Bankai. (Said reason being that it does not conform to the style of combat the leader of the Stealth Force conforms to.) One may also note that most of the unnamed members of the Stealth Force are typically shown with no Zanpakuto. One must also take into account that Yoruichi is well regarded as one of the finest hand to hand combatants in Soul Society as well as one of the fastest and most proficient users of Shunpo. Keeping these things in mind, perhaps her Zanpakuto would provide no benefit or even hinder her fighting style.

The story of Yoruichi's departure from Soul Society and her back story and Soifon's initiation state that Suzumebachi is the Zanpakuto given to all the reigning leader of the Onmitsukidō or Stealth Force. Yoruichi doesn't have her Zanpakuto because it is inherent to the current leader of the Stealth Force, which she is not.

I believe it's more like Ise Nanao's case. It's probable that it's a family something and so she had to give it up for the next in her family to wield it

In the Zanpaktou Rebellion Arc, it is told by Suzumebachi or Soifon's zanpaktou that she used to belong to Yorouichi. I just saw this recently, but if you see around the 4:30 minute mark of this video, Suzumebachi states this. https://www.youtube.com/watch?v=4DgCe9wM_0k.

6
Why do certain captain-level Shinigami wield small zanpakuto?
9
Name of Zaraki Kenpachi's Zanpakuto?
2
What type of weapon is Nnoitra's zanpakuto?
1
Why are Shinigami and their Zanpakuto so different?
2
What's the difference between Toshiro and Ichigo's Zanpakuto lore?
6
How does Renji become stronger than Rukia?
3
Why does Jushiro Ukitake have an item from Yoruichi's clan?
3
How can the spirits of Zanpakuto manifest in the real world?
3
Can you release your zanpakuto if you are mute?
2
In Bleach, if a Shinigami transfers their power to a human, where does their zanpakuto come from?