What was the first anime that uses different ending/opening songs in every episode?

After watching a few series I realised that some of them use different opening/ending songs in each episode (e.g. Oreimo). I noticed that it must've been quite expensive to do this, and some other animes like Love Live use the same song sang by different people every episode.

Clarification: If the anime has 12 episodes, there has to be 12 different endings, not less than that.

I took up Gao WeiWei's suggestion and used ANN's API to create a duplicate of their database and then search for all titles that have as many OPs/EDs as they have episodes. If anyone is interested in the code for this (it's not nice :P) and all results, go here.

I restricted the analysis to titles that have at least 6 episodes. ANN's episode field sometimes contains additional information such as '10 (+2 Specials)' in such a case I only take the first number and ignore the rest. There are no checks for the title or anything like that, if ANN lists an ending twice or if the same ending appears multiple times with different artists, those all count as separate. Most importantly, the relevant date is the start date (because that is less parsing work and because often there is no end date given).

Below are the results. With the above restrictions, ANN has 30 animes that fit the bill and the oldest of them is Shōnan Bakusōzoku. Note though, that the final episode is from 1999! Among the first few, Iczer Reborn ended in 1991-02-25 already, so maybe that's your winner? See here for the full table.

Huh, more endings than episodes? You may have noticed, there are titles with more endings than episodes: They can all be considered to have as many endings as episodes. For Ten Tokyo Warriors, Sakura Wars 2 and Heaven's Lost Property those are caused by some kind of inconsistent annotation in ANN. For Akikan! they list an extra ending for a special but don't count the special towards the episodes. Katanagatari got an extra ending for the noitaminA rebroadcast. For Highschool of the Dead and Maken-Ki! Battling Venus they count the OAV ending towards the anime.

Almost made it I thought it would be interesting to also check which ones cut it very close. Here's an addtitional list sorted by #EPs/#EDs and then sorted by vintage. I left out all that have a quotient of 1 or less, since we already know those from above. The full list can be found here.

As ʞɹɐzǝɹ already mentioned Lucky Star should qualify for the previous list, having 24 episodes and endings, but ANN is missing the ED for ep22. And so on, you can already see, this DB isn't perfect either ;)

Overview Finally, here's a barplot showing the distribution of the number of endings among all animes that fit the assumptions described initially. 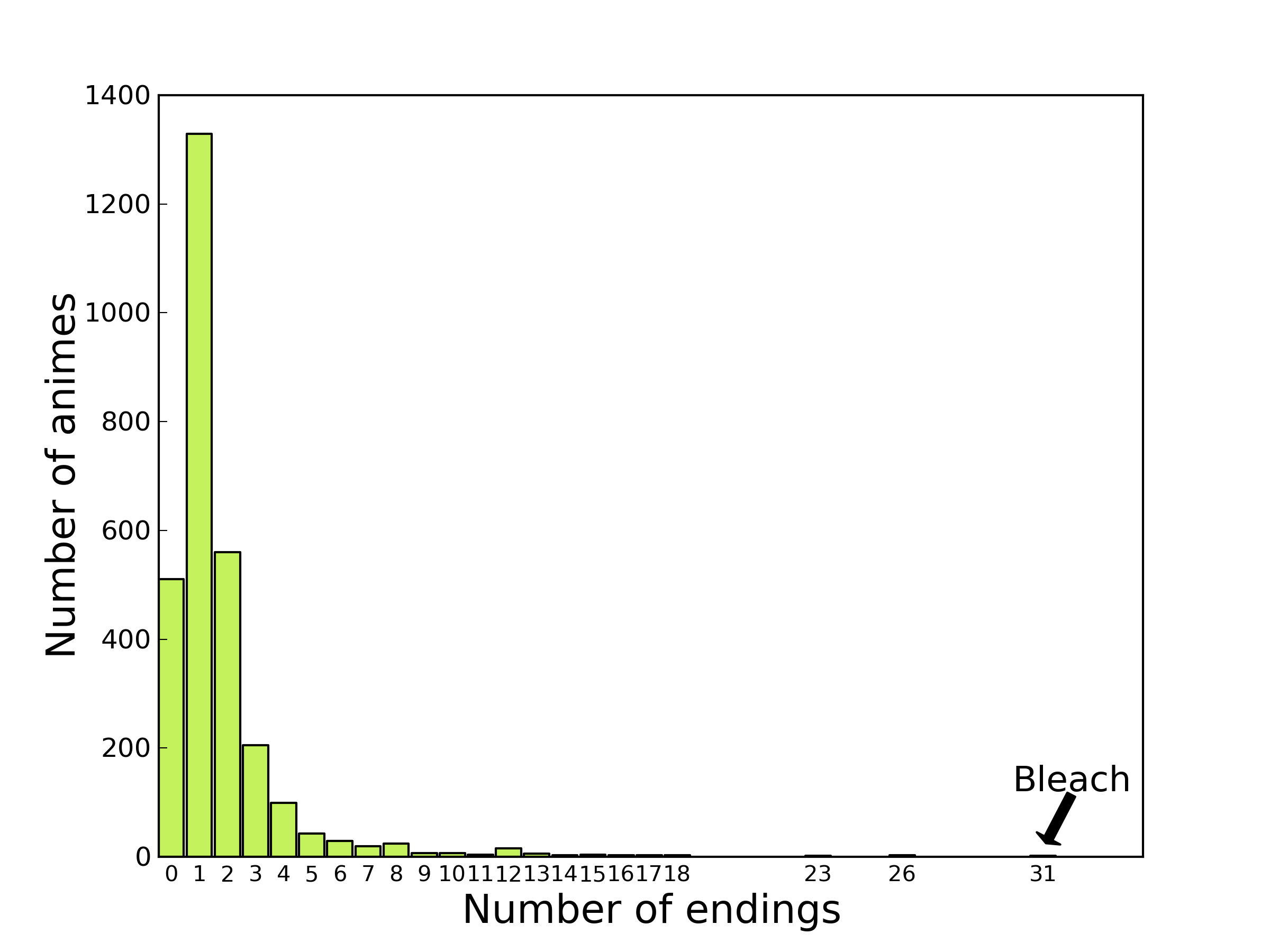 There are only two result for #EPs = #OPs, and those are already shown in the list above (Sakura Wars 2 and Angelique: Twin Collection). The results for #EPs / #OPs are here. OPs are generally not as diverse: 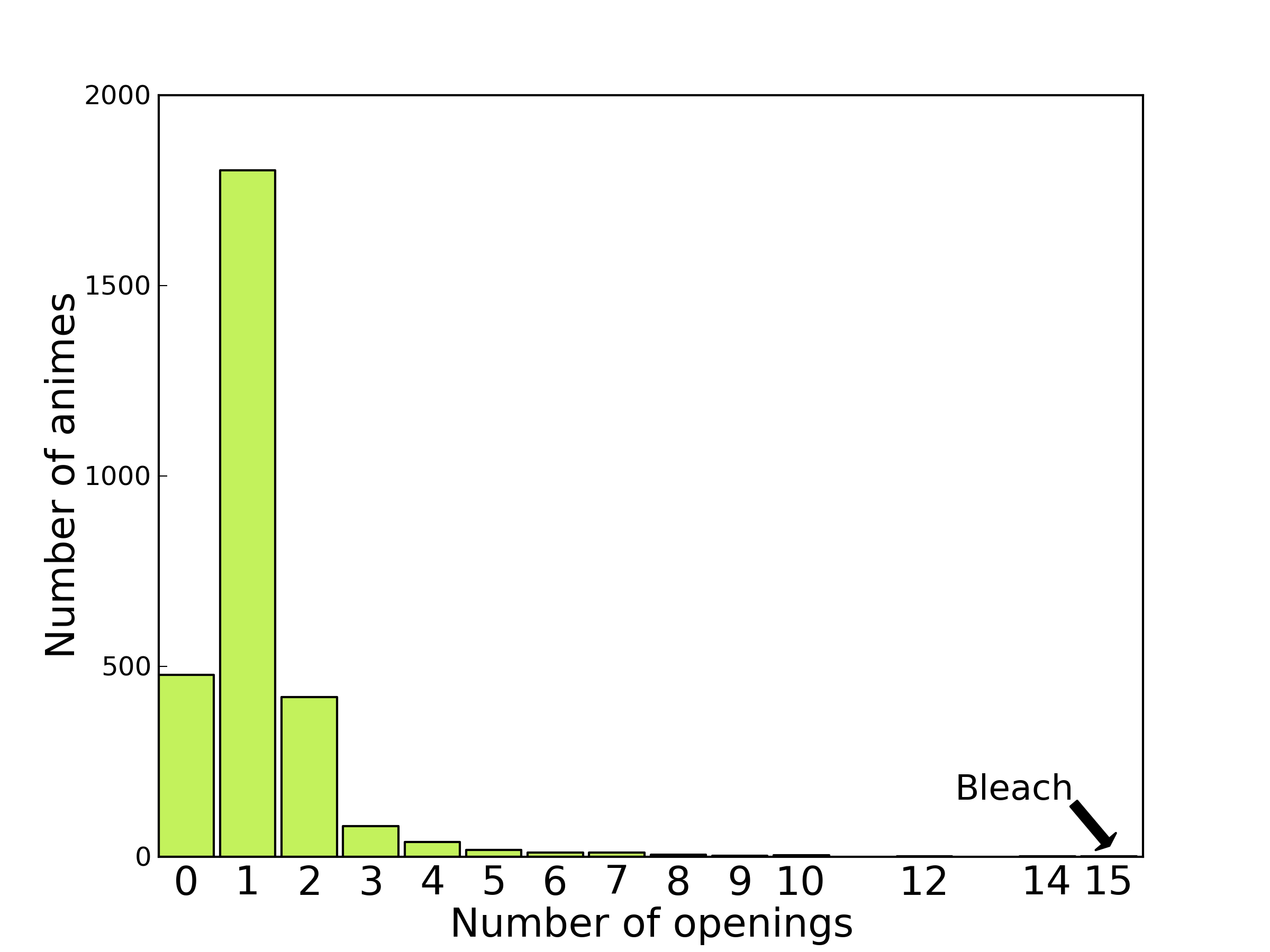 As per Gao WeiWei's suggestion: There are 221 animes with #OP > #ED, among those 115 have no endings listed in ANN at all, which is probably a mix of the truth and missing annotations (full list). The other way around, there are 781 animes with #ED > #OP, 82 with no openings at all (full list).

This is not the definite answer either of course, ANN doens't provide an XML schema, so I might have overlooked something, and even if everything went well in my parsing, we already know they have a different opinion on the number of EDs e.g. for NGE (see GaoWeiwei's answer for that discussion), and there are several errors mentioned above. Answering a different question I realized I should have probably made sure the endings are unique, that doesn't affect the main result here though.

I don't know what is the first anime to have done this, but I can name one anime older than both Oreimo and Love Live that has done this: Neon Genesis Evangelion (2003 Renewal DVD1). According to Wikia:

Every episode has a different "Fly Me To The Moon."

Let's see if anyone can beat me to the Moon.

1 Thanks to mivilar for the correction. Detailed information about all the ED versions in the different releases of Neon Genesis Evangelion can be found here.

14
Why did the anime stop having ending songs since episode 279?
63
When and why did the trend of 1:30-long openings and endings begin?
14
Why do many anime OPs and EDs have onscreen lyrics?
1
What opening music was played at the beginning of the anime Kaiketsu Zorro?
19
Why do some anime not have an opening in the first episode?
2
Why are some anime OP/ED theme songs sung by Kpop/Korean Artist?
2
Does Light Novel-based, slice of life anime in general have a clearly defined setting?
6
How to tell apart Japanese and non-Japanese characters in-universe and out-of-universe?
7
Was this really the original American/English-language opening/intro to Sailor Moon? If so, why was it so heavily changed?