Why does no one remember Gildartz?

During the Battle of Fairy Tail, no one mentions the S-Class wizard, Gildartz, when suggesting who is the strongest. Why does no one remember him? Do they assume that he would be on a mission that would take too long, and would take perfect timing for him to show up?

He is mentioned. In chapter 119, Mystogan mentioned him to be the strongest of Fairy Tail and I quote:

Mystogan: I have little interest in such things, but I would propose Gildartz.
Laxus: Eh, he's no use... He ain't coming back.

Presumably, Laxus knew Gildartz was undertaking the 100 year job involving Acnologia and had assumed him to have died, since no one else has ever come back from that mission alive. 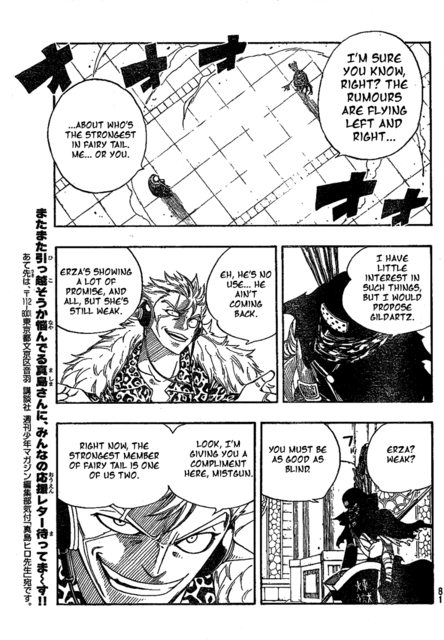 If you ask about the anime specifically, there is a different reason as to why he is never mentioned.

This is because it was never expected to reach the point when Gildarts would show up, so instead of mentioning a character who wouldn't appear in the anime, they left him out completely.

The anime ended up lasting longer, and his character is still introduced as normally intended - the only change is that there is no mention of him before that point.

In the manga, Gildarts is mentioned several times as being the strongest Mage within Fairy Tail before his actual appearance. However, there had been no indications or mentions of him in the anime prior to Episode 74. This was because the anime was initially supposed to stop before his appearance.

Source: First bullet in the 'trivia' section. This is the answer to a question asked at a convention, I think, although I can't remember which one.

5
Was Erza's nickname 'Titania' inspired by Shakespeare?
1
Why was Happy and Carla affected by Azuma's take over of Tenrou Islands magic?
1
When does Mystogan defeat all of the Phantom Guild's subdivisions?
4
How does one become a Wizard Saint?
4
Why did Macao ask Fairy Tail not to touch Twilight Ogre when they came to take the money?
5
Can more than one person use the same type of Take Over magic?
0
Why did Makarov not use Fairy Law against Tartaros?
0
Does Fairy Tail have one main goal / plot, or is it just many separate stories?
4
Is Natsu's Etherious form still alive?
0
Timeline misunderstanding in Fairy Tail