What's the origin of spiral glasses as a Japanese stereotype?

I've noticed - and indubitably, others have, too, as noted on this TV Tropes page - that often, whenever a "nerdy" character wears glasses in anime, they have a spiral shape on them. Examples are easy to find, with popular examples including Saori from Oreimo: 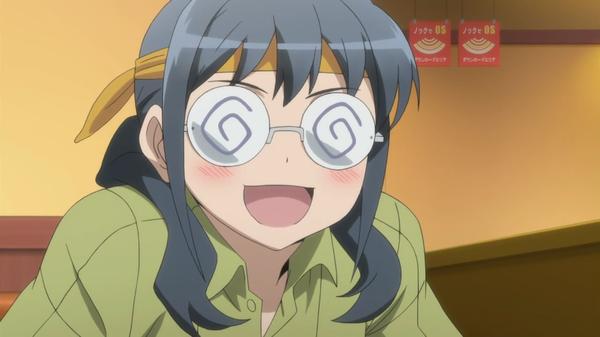 In particular, I became curious upon noticing them in Berserk, on Puck's "business" glasses:

I was just wondering, since this trope seems so ubiquitous in Japanese cultures and rare in others - what is the origin of this design? What about the spiral shape is intended to elicit an aura of "geekiness", and what major origins or influences led to its widespread use today?

There was supposedly a time, before innovation introduced plastic lenses, when glasses were made with the bottom of cow milk bottles. 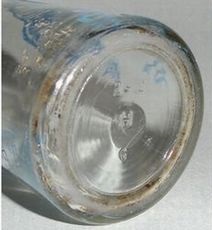 Bottom of a milk bottle manufactured in Hiroshima, Showa 35 (1960)

As you can see, the bottom of the bottle has concentric circles, and the spirals seen in manga basically come from there, and evolved into spirals later.

Basically, the idea of the spirals is to emphasize the fact that the lenses of the glasses worn by a character are overly thick, so they are similar to these old days glasses. Effectively, one of the stereotypes/means to recognize otakus in late 90s in Japan was their thick-lens glasses.

There is also the idea that spirals are associated to another trope of being dizzy, basically a negative emotion that can be attached to the negative stereotypes surrounding otaku.

This trope is so strong that it's literally called "bottle's bottom glasses" in Japanese (瓶底眼鏡), and if you google "bottom of cow milk bottle" (牛乳瓶の底), you will see countless glasses results, as many opticians use the trope as their business' name.

Nerds are usually depicted in media to weak very thick glasses. This is probably true in any country or culture. The spiral is just the way manga and anime artists illustrate the very thick glasses. Instead of drawing concentric circles or some other style, they just draw spirals as it's easier that way.