When was Orochimaru kicked out of the village?

I've been trying to figure out when time-wise (rather than chapter/episode-wise) that Orochimaru was kicked out of the village. I know that it must have been after the Yondaime was killed (given that it was the Sandaime who kicked him out), and at least in the anime he watched Itachi train, but I can't figure it out beyond that.

Is there a canon answer for when (say, in relation to the Kyuubi's attack/Naruto's age) Orochimaru was kicked out of the village and for how long his human experimentation occured inside the village before then?

I do not recall it ever stating how long Orochimaru was conducting experiments while in Konoha (my memory is fuzzy and could not find any sources). However, Orochimaru began his experiments sometime after finding the shedded skin of a white snake as shown in Chapter 344. Hiruzen goes on to explain that this was a sign of good fortune and rebirth. According to the wiki, it was at this moment when Orochimaru became interested in kinjustu. 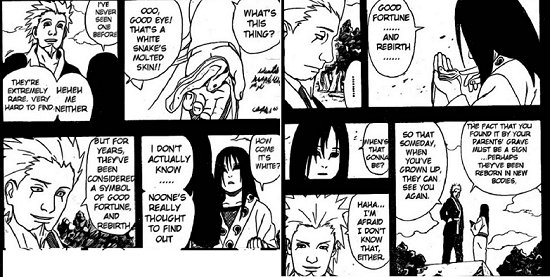 As for Orochimaru's defection from Konoha, this occurred shortly after Minato was chosen to become the Fourth Hokage. In Chapter 116, during the Sand's invasion in the middle of the chunnin exam, another shinobi asked Ibiki why Orochimaru was considered a missing-nin. 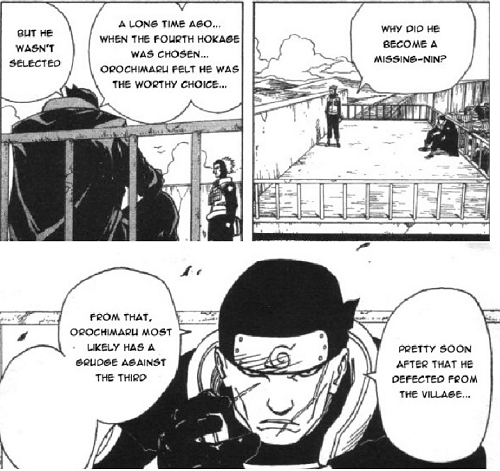 6
Is the reanimated Minato much stronger than when he was alive?
14
What or who can kill Orochimaru's life force?
10
What's the deal with Orochimaru and seals?
10
How did the villagers know about Naruto being the Kyuubi's jinchuriki?
8
When did Itachi plant his crow inside Naruto?
6
Why did Itachi seek Tobi's help?
5
Why does Obito look like an adult during the Kyuubi attack on Konoha?
6
How old is Shisui compared to Itachi?
11
Did Itachi Uchiha want to be Hokage when he was young?
9
Why didn't the entire village know Naruto was Minato's son?