Is there a name for the art style in Gankutsuou?

In Gankutsuou, the art style is pretty weird. Instead of having normal coloring/shading, different pieces (such as hair or a shirt) have their own pattern that doesn't move with the piece. You can see it in the Count's hair and in the shirt below. Is there a name for this type of art, and is this something that is unique to Gankutsuou or to anime? 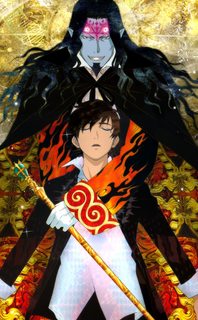 anime-production gankutsuou
Share
Improve this question
edited May 16, 2014 at 6:30

According to an interview (in French) with the series creator series creator, Mahiro Maeda, the art style of the anime combines western Impressionism with Ukiyo-e, a 19th century Japanese woodblock printed art style that strongly influenced the Impressionism movement around the same time.

One of the particularly notable mini-movements within impressional is the Art Nouveau style, particularly the influence from the Austrian artist Gustav Klimt, likely best known for his work The Kiss. Klimt was mentioned to be one of Maeda's most favorite artists and his works gave way to inspire the blocks of strong primary colors seen in the series.

Klimt's style applies a tension of naturalism and stylization, bridged together by turns through fairly intricate multiform and multi-patterned surfaces and bold contrasts of color with highlights of gold, silver, coral, and gems. This is all wrapped around a pervasively mystical and alluring aura brought about the the spiraling and intertwining lines juxtaposed with stark square and triangular shapes. All of this is reminiscent of a ghostly mosaic aesthetic.

For more information on the visual style, I recommend picking up the illustration art book on the series Gankutsuou: The Count of Monte Cristo Complete.

There doesn't seem to be a technical name for this animation style. TVTropes calls it Unmoving Plaid, while it's also referred to as "plaid animation" and "static pattern animation".

Not the answer you're looking for? Browse other questions tagged anime-production gankutsuou .

10
Is there a difference in drawing style between different anime for different demographics?
4
How does Gankutsuou compare to the original book?
9
Is there any relation between hair style and character's personalities?
1
Why isn't Digimon consistent with its rule mechanics per story/season title?
0
Different any art styles for characters
2
Term for animation style change that accentuates emotions/feelings
2
What makes the anime art style look good when it is anatomically inaccurate?