How could a B hero class like Fubuki defeat a dragon level villain?

In the webcomic, Fubuki battles

and defeats her. How could a B hero class like Fubuki defeat a dragon level villain?

Well if you've read the chapters concerning the battle then you should know how she wins. It spends most of the chapter where she wins telling you exactly how she wins, right down to the mechanics.

First, don't forget that Fubuki is intentionally remaining B-class because she doesn't want to compete with Sweet Mask in A-class or her sister in S-class. Her class is not indicative of her true strength. Indeed, in general the ranks of heroes and monsters are both not necessarily accurate. The anime and manga spend a little bit of extra time pointing this out, having a low-ranked and seemingly puny-looking monster turn out to be very strong, while you are explicitly told there are cases like this where the rankings are inaccurate. Second, as I said, the chapter spells it out for you:

She uses the move she calls "psychic whirlwind". It details that normally psionic powers follow the path of shortest distance. But she learned to control the path her powers take, and creates a whirlwind of psionic power around her. So instead of her powers clashing head-on with Psykos's and getting crushed—because Fubuki does plainly admit that Psykos is stronger than her—they instead deflect Psykos' attacks harmlessly away. Psykos subsequently wastes her energy, exhausting herself until she's easy pickings. 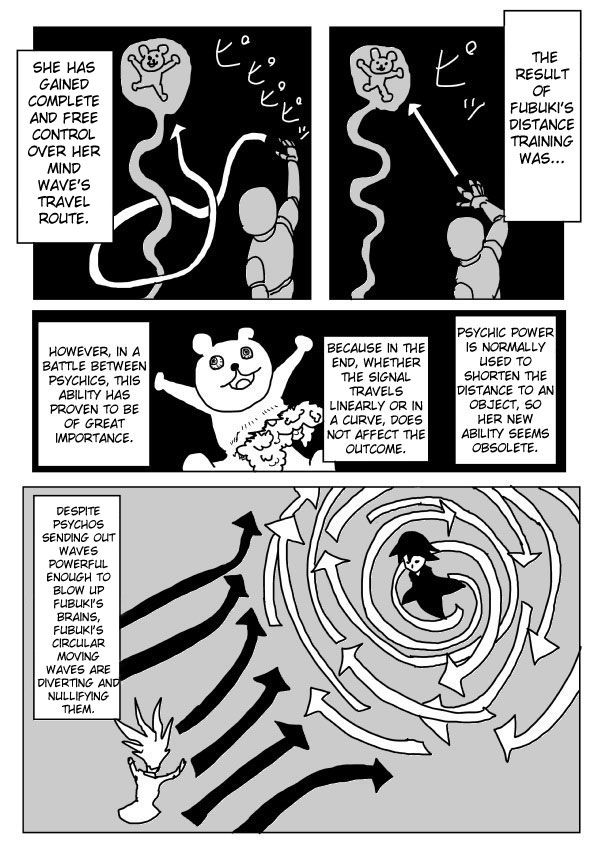 In other words, Fubuki wins because a fight isn't strictly about power. Fubuki has the superior skill and compatibility to come out the victor.

0
Who is the strongest esper in One Punch Man?

4
Why exactly is Saitama a hero?
4
Why does the Hero Association ratings have several S-Class Heroes to be more powerful than Tatsumaki?
1
Who is the strongest hero physically after Saitama?
1
How did Saitama defeat a monster before becoming a hero?
2
Can Mumen rider resist a S Class hero punch?
1
Who does the image labeled “god level threat” in OPM webcomic chapter #77 belong to?
1
Why is Genos directly promoted to S rank and surpasses Amai Mask?
5
How could Armored Gorilla beat Marshall Gorilla?