Why does connecting an automail hurt?

We could see plenty of times in both Fullmetal Alchemist anime series (at least twice in the 2003 series and at least once in the 2009 series, according to my memories) that connecting the automails seriously hurts for Ed. What's the reason?

My theory is that during connecting, it "turns on" and sends an electric wave to the brain to provide right functionality.

Essentially, after the completion of the loss of an arm or other limb, there is a raw set of nerves poking out (not literally, but you know what I mean). These are what connect to the automail's circuits. As stated by Vic, all of these nerves are stimulated simultaneously, causing a severe, severe shock to the person.

This pain is shown to be more obvious in the 2003 anime, lasting for quite some time after the connection. In the 2009 anime (Brotherhood), the repercussions of the event are significantly tamer. 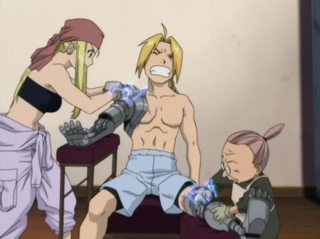 Unfortunately, it's hard to pin this down exactly to something you might feel in real life. One common example would be hitting your "funny bone" which is actually a group of nerves in the elbow. However, this still does not do justice, as the nerves are not exposed and there are not that many of them.

The only thing biologically similar in our world is that of an exposed nerve under a tooth. If you've ever lost a tooth, and touched or injured the exposed nerve, you'll know that this pain pretty much brings you to your knees. And that's a tooth-area worth of nerves; expand that to your entire shoulder and you've got a HUGE amount of pain. 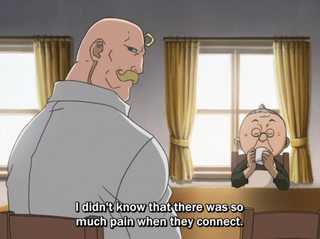 Given that the pain is akin to something few humans can ever even experience, it is no surprise that even the characters in the show (like Armstrong, shown above) cannot comprehend the pain behind the process.

Its the shock to the nerves. The connection activates a lot of nerves at once; causing a quick shock of pain to the user

Linked directly to the nervous system, an automail prosthesis does not usually require an external energy source, and can be moved at will like a natural appendage, taking electrical pulses from the nerves to power and regulate the various electric motors and pneumatic actuators inside

The reason people can feel things (like pain) physically is due to nerves. When the automail is connected; the nerves "turn on" all at once.

It's stated in both the animes and the manga. You're connecting STEEL WIRES to every nerve one a time. Then sending huge amount of electric charges and heat in order to have those already damaged nerves function to control the prostatic. Add that to the fact you might have to add further amputation to the damage in order to even fit the automail.

28
How does the automail work?

34
Why does an alchemist need a transmutation circle?
21
Why can't Alphonse repair Edward's automail using alchemy?
15
Why does Major Armstrong sparkle?
28
How does the automail work?
8
Why does Edward prefer to use his automail over Alchemy?
4
How does the hierarchical rank system in Amestris armed forces work?
5
Can gold be transmuted in the Fullmetal Alchemist continuity?
8
Where are we shown Rose's surname?
8
Why does Ed and Al's mom cost so much to transmute?
11
If you had two automail arms, could you still use alchemy?